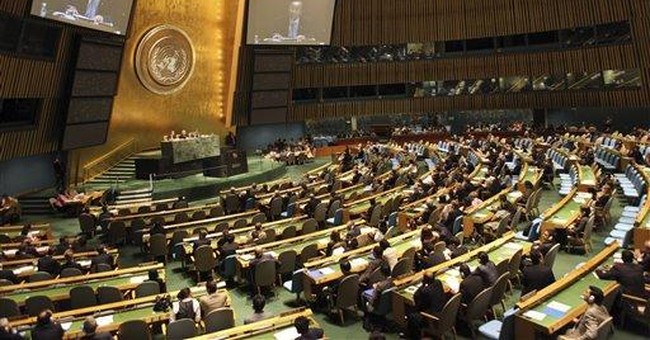 As if the invitation from Secretary of State Antony Blinken for the U.N. to investigate the United States' role in "systemic racism" in the U.S. wasn't disturbing enough, there are more details coming out which should "alarm and shock every single American, regardless of party or political persuasion," according to Stephen Miller, the president of America First Legal (AFL). The group is filing a FOIA request to learn more about the role played by UCLA Law Professor E. Tendayi Achiume, who was selected for this investigation.

Miller spoke exclusively with Townhall, which was given access to the FOIA request.

The motivation for the request is to do with the process of selecting Achiume. It also is about a need to "expose how this administration has truly formed an alliance with Critical Race theorists and with some of the most extreme ideologues in... our political and academic systems."

Concerns are not only highlighted when it comes to the State Department. "It also underscores the deep corruption of the U.S. academic system," Miller told Townhall, "that the U.N. official that is responsible for investigating racism, is in fact a Critical Race Theory extremist" and is "also a prominent professor at taxpayer-funded UCLA.".

The FOIA request is seeking records, going back to January 20, 2021, to do with:

A. All communications, including, but not limited to, electronic mail, texts, memoranda, and handwritten notes, between the United States State  Department and the United Nations related to “systemic racism” or  “institutional racism” in policing.

B. All records, relating, regarding, or referring to Secretary Blinken’s invitation to the United Nations Special Rapporteurs to have them investigate systemic racism in America.

D. All communications, including, but not limited to, electronic mail, texts,  memoranda, and handwritten notes, between any employee at the Department of State and any person affiliated with the Human Rights Council, the U.N.  Special Rapporteur on Contemporary Forms of Racism, or the U.N. Special  Rapporteur on Minority Issues regarding, referring, or relating to systemic racism in American policing.

E. All records of, regarding, referring, or relating to the Department of State’s legal and/or working definition of the term “systemic racism” as used in the invitation to the U.N. Special Rapporteur on Contemporary Forms of Racism.

F. All records sufficient to identify each person(s) employed by the Department of  State responsible for determining what is or is not “systemic racism” in  American policing.

G. All communications between employees at the Department of State and the  Department of Justice regarding, referring, or relating to Secretary Blinken’s invitation to the United Nations Special Rapporteurs to investigate systemic racism in America.

The FOIA request says in no uncertain terms that "the Administration would have been hard-pressed to find someone more radical to invite to conduct such a review," and points out that one of the professor's titles includes the Special Rapporteur on Contemporary Forms of Racism.

According to the official United Nations Human Rights Office of the High Commissioner website:

Millions of human beings continue to be the victims of varied forms of racism, racial discrimination, anti-Semitism, xenophobia and related intolerance. These scourges not only persist, they are continually assuming new forms. The mandate of the United Nations Special Rapporteur on contemporary forms of racism was created to intensify international efforts to combat these violations of basic human rights.

In this role, the Special Rapporteur transmits urgent appeals and communications to States regarding alleged violations of international human rights law; undertakes fact-finding country visits; and submits reports to the UN Human Rights Council and the General Assembly.

Achiume's official bio at UCLA notes that "Professor Achiume is a core faculty member of the UCLA Law School Promise Institute for Human Rights, the Critical Race Studies Program, and the Epstein Program in Public Interest Law and Policy."

In November 2017, the United Nations Human Rights Council appointed Professor Achiume the UN Special Rapporteur on Contemporary Forms of Racism, Racial Discrimination, Xenophobia and Related Intolerance, making her the first woman to serve in this role since its creation in 1993. In 2016, she was appointed to co-chair the 2016 Annual Meeting of the American Society of International Law (ASIL), and she is currently the co-chair of the ASIL Migration Law Interest Group. In 2018, she was named an Emerging Scholar by Diverse: Issues in Higher Education. She received the Distinguished Teaching Award in 2020—UCLA's highest honor for excellence in teaching—and the Eby Award for the Art of Teaching.

"One could speculate that whatever Ms. Achiume writes about racial bias in policing in the United States for the U.N. will be a condemnation," the FOIA notes, before acknowledging that such speculation is not necessary on account of what writings are already public.

The FOIA request also points out:

Any report from Professor Achiume will not be an impartial assessment into the state of race and policing in the United States. It will be a predetermined hit piece,  conducted at the express invitation of our own government. Indeed, it seems that she  does not need an invitation to examine race in policing, because she has already reached and published her conclusions on that front.

The United States is particularly targeted when it comes to her 2019 report on "Reparation, racial justice and equality."

The report is also listed on Professor Achiume's UCLA page, in her Bibliography, under "United Nations-Thematic Reports."

A "Background" of the report in part claims:

The International Convention on the Elimination of All Forms of Racial Discrimination requires States to ensure affected individuals enjoy access to justice and effective remedies—including just and adequate reparation—for rights violations.  This obligation is not exceptional, but rather a core principle of the UN human rights system. Every major human rights treaty envisions access adequate redress for violations.

As Miller mentioned, which he has discussed with Townhall previously, the Biden administration's cabinet picks have been tasked with fulfilling a so-called "equity" agenda. "This," Miller said, "should be understood in light of that."

When it comes to the actions of Sec. Blinken specifically, Miller suggested two ideas. One possibility is that the secretary is "obeying the president's command to put equity, and not America's interests, at the center of his department's mission" and that "he believes this anti-American drivel," which would mean "he's a far more shallower and far more corrupt individual than we could have even imagined." The other possibility is that Blinken "is a completely absentee secretary of state, who hasn't the foggiest clue what is being done in his name," and is someone "who is secretary in name only, in which case the radicals underneath him are running the show."

Sec. Blinken "is himself a radical or has ceded control to radicals." Either way, what he has done amounts to "a terrible stain on our country" that someone like Achiume would be tasked for this project.

As has been pointed out many times, China is laughing at the United States focusing so inwardly on racism. There is proof that spokespersons for the Chinese Communist Party--which engages in human rights abuses, including genocide--have used our own words against us, including from Biden himself.

Further, for the United States to be investigated for "systemic racism" is laughable at best considering members of the so-called Human Rights Council have legitimized not only China, but Venezuela, Cuba, Iran, and Saudi Arabia.

And, as the FOIA request points out, it is questionable at best as to what business the State Department thinks it has in getting involved in such domestic affairs:

First, it is highly questionable why the State Department has engaged on matters of domestic law enforcement. The State Department’s mission includes, “lead[ing]  America’s foreign policy through diplomacy, advocacy, and assistance by advancing domestic law enforcement; that is—and always has been—delegated to the  Attorney General, and in some cases more recently, the Secretary of Homeland  Security. Moreover, policing and law enforcement in the United States is a function that has traditionally been left to the States. To the extent policing and law enforcement does fall to the federal government, there are generally well-defined boundaries and limits over what is federal jurisdiction and what is state or local. This is an area that the Departments of Justice and Homeland Security have extensive experience in, and which should have been consulted before invitations to international organizations were ever sent.

Further, the State Department, Miller pointed out, is the one "trying to legitimize this anti-American project," as he reminded it's not like this is coming from an adversarial nation's State Department, but our own.

The FOIA request was submitted on Monday, August 2, 2021.