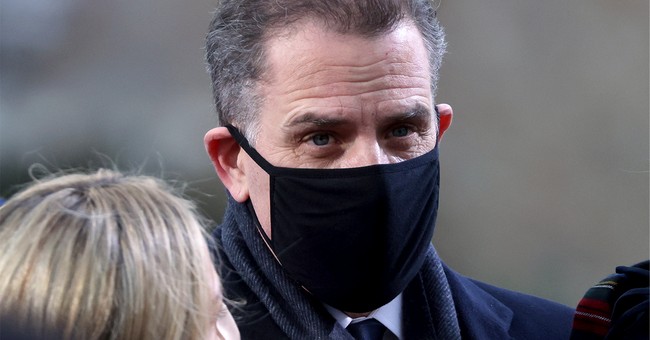 Hunter Biden was given an opportunity to further promote himself and his artwork during Thursday's "Nota Bene: This Week in the Art World" podcast episode, with hosts Nate Freeman and Benjamin Godsill.

A big NOTA BENE exclusive—we have a very special chat with Hunter Biden, the eldest son of the leader of the free world, who has become one of the world's most famous artists months before the opening of his first solo show. In a candid interview, Hunter talks about how he got first bit by the art bug at the National Gallery, his love for the work of Mark Bradford and David Hockney, how his dad is the first person to see new paintings, and addresses for the first time the prices for his work and the wacko conspiracy theories surrounding who's buying them. Above all else, Hunter opens up about his passion for making art, and empathizes with anyone who's ever had to struggle to become a successful artist.

As was reported last week, Biden will be making appearances at art shows to meet with potential buyers, despite how this conflicts with assurances from the White House that the buyers would be kept anonymous.

The hosts offered "there's very little upside" to Biden selling his paintings, considering the amount of negative attention heaped on him and his family, though he shared that his art enables him to apply himself to something with "an incredible sense of purpose" and has helped him "to handle some of the swings and arrows" that come with being the adult son of a politician with his own sordid past.

Biden emphasized many times throughout the interview that there is "courage" involved in putting his art out there.

He lamented it was "an unfair advantage" for his dad to be in the public light, but Biden also acknowledged others have not been so lucky as to share his art, which seems to be a given since most people are not the adult children of the president.

For all of the seriousness involved when it comes to realizing the platform and influence he's been afforded, Biden also couldn't help himself from taking the opportunity to mock conservative news coverage of him. He's not only gotten to share his art with the hosts, with his friends and family, but also with "the entire viewing audience of Fox News, OAN, and Newsmax." Hunter also suggested he's "the most famous artist in the MAGA world."

Although he said he didn't want to sound too snarky, Godsill joked that that "may be some of the only contemporary art that they happen to be exposed to."

When asked what his response is to the people who take issue with his prices, Biden asked "other than "f**k 'em?" He and the hosts laughed it off. Freeman said "that's a pretty good response" and Godsill pointed out "I think that's all you need."

Biden also tried to suggest his name was irrelevant to his art's prices. "Look man... I never said my art was gonna cost what it was going to cost or how much it would be priced at. I'd be amazed, you know if my art is sold at, you know, for $10, just because the first time that you ever go about it is the idea that someone is attracted to your art, let alone that they would pay something for it," he said.

He went on to say that "the price was completely subjective and sometimes have nothing to do other than the moment."

In the last few minutes of the podcast, Biden referenced concerns about his meeting with potential buyers, but was dismissed by the hosts who assured him "the whole, the notion of it's ridiculous that somebody could try to buy a painting and use that as a sham." Such "a notion" was said to be "absolutely laughable."

And yet this was a podcast where they supposedly wanted to keep politics out.

As Matt has reported, Walter Shaub, the head of the Office of Government Ethics under former President Barack Obama, is one of the many who have expressed ethical concerns.

Tamara Keith's piece earlier this month for NPR also has even more examples of ethics concerns:

"I think it's pretty obvious that Hunter Biden's works would not sell for these kinds of prices were he not the son of the current sitting president," said Joan Kee, a professor in the History of Art Department at the University of Michigan. "So that already sets up a potential conflict of interest."

Another question remains though: Will anyone be willing to pay that much money for a Hunter Biden painting?

"There are 7 billion people on the planet," said Axios' Felix Salmon, who has been covering the art market for years. "Is it hypothetically possible that one or two of them may be interested in paying that much for one of these paintings? Sure. But it's unlikely."

It's worth wondering if Biden would say "f**k 'em" about these people, too.