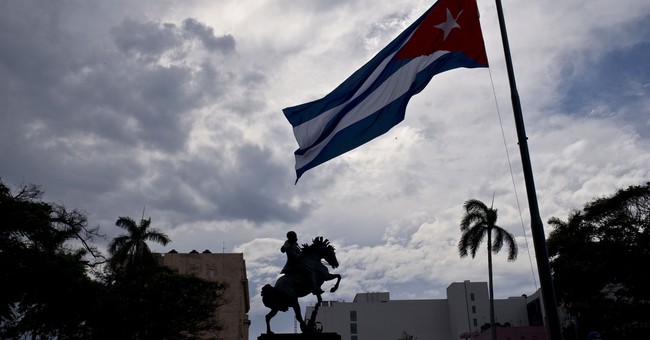 All aound Cuba on Sunday, thousands took to the streets to protest the Communist dictatorship regime under Miguel Díaz-Canel and the miseries which come with it. As tends to be the case with those living under such oppression, the people have been facing shortages of food, medicine, and vaccines. In allowing #SOSCuba and #PatriaYVida to trend, though, Twitter is pushing a narrative that it's to do with "the impact of COVID-19."

Ignores this is really about how socialism is a disaster & always leads to tyranny, despair & suffering pic.twitter.com/T6DLOgFoAc

Frances Robles for The New York Times writes that the protests are "a remarkable eruption of discontent not seen in nearly 30 years." Robles also tweeted that she had "never ever seen anything like the protests today."

I have been covering Cuba since the 1994 rafter crisis. I have never ever seen anything like the protests today. https://t.co/h8Ukuvpfp3

She also included in her reporting:

In a country known for repressive crackdowns on dissent, the rallies were widely viewed as astonishing. Activists and analysts called it the first time that so many people had openly protested against the Communist government since the so-called Maleconazo uprising, which exploded in the summer of 1994 into a huge wave of Cubans leaving the country by sea.

Carolina Barrero, a Cuban activist, went even further. “It is the most massive popular demonstration to protest the government that we have experienced in Cuba since ’59,” she said by text message, referring to the year Fidel Castro took power. She called the public outpouring on Sunday “spontaneous, frontal and forceful.”

“What has happened is enormous,” she added.

While there is still footage online over social media as of Sunday evening, Robles warns that footage which had been streaming live on Facebook for almost an hour had "suddenly disappeared." Sen. Marco Rubio (R-FL), who is posting about the protests from his Twitter account in Spanish and English, warns about the availability of such footage.

Expect the regime in #Cuba to block internet & cell phone service soon to prevent videos about what is happening to get out to the world.

Not long after, Patrick Oppmann, CNN's Havana Bureau Chief, tweeted that the Internet has indeed been cut off in part of the city.

Internet is cut off in parts of Havana right now as frustration has boiled over for many people. Cuban officials have called for government supporters to take to the streets, clearly not giving an inch to calls for change. pic.twitter.com/btQAU3QHws

According to a resident Oppmann spoke with, the people are being subject to 12 hour power cuts and no electricity over this particularly hot summer.

One resident in San Antonio de los Baños, Cuba told me people there have been enduring 12 hour power cuts each day and the frustration of no electricity in the summer heat was one of the factors that brought people into the streets today.

Widely viewed videos show people chanting "we are not afraid."

Never seen images from #Havana. Thousands are mobilising across #Cuba demanding the end of the communist dictatorship while screaming “we are not afraid…we are not afraid.”#SOSCuba #Democracypic.twitter.com/QSomExnzDw

Watching the Cuban people wave the American flag while they call out for liberty is so powerful and a reminder of what America represents around the world.

Praying for the Cuban people as they call out for freedom. https://t.co/3kydlabJ1z

The Federalist's Giancarlo Sopo pointed out that this is reminiscent of Pope John Paul II's trip to Cuba when he said "Do not be afraid."

When Pope John Paul II visited Cuba in 1998, he famously told the Cuban people: "Do not be afraid."

I think it's no coincidence that as thousands of Cubans march across the island today, they chant "We are not afraid!" God is with the people of Cuba.#SOSCuba???? #PatriaYVida pic.twitter.com/hLl1PIdC3V

It's not just in major cities like Havana, though, but in this small town.

Florida's other Republican senator, Rick Scott, is also tweeting in English and Spanish. He and Rubio are issuing calls to the Biden administration, specifically Sec. of State Antony Blinken, to call on the Cuban military to protect the people.

The incompetent communist party of #Cuba cannot feed or protect the people from the virus.

Now those in the military must defend the people not the communist party.

The Biden administration should quickly denounce any detention or violence toward peaceful protestors in Cuba.

America & every freedom-loving nation must fully support the brave Cuban people in their calls for liberty & human dignity. The world is watching. #SOSCuba (2/4)

There is also footage, however, of police beating up peaceful protesters.

So far not seeing much interest from US National media outlets pic.twitter.com/ksmudeAE0D

As Robles also reported, the regime predictably tried to set the narrative:

Cuba’s foreign minister, Bruno Rodríguez, confirmed via Twitter that Mr. Díaz-Canel had rushed to San Antonio de los Baños, where the government insisted that “salaried” protesters were trying to provoke a severe reaction by the authorities.

“Celebrating what they orchestrated today in San Antonio de los Baños only uncovers the worst nature of people,” a government Twitter account quoted the president as saying.

“Cubans know perfectly well that the government of the United States is principally responsible for Cuba’s current situation,” the foreign ministry said in a Twitter post. “Cuba and its streets belong to the revolutionaries.”

Within hours of the extraordinary events, the president broke into national television programming to urge government supporters to hit the streets and confront the protesters. He blamed the United States for restricting exports, access to funds and travel to Cuba, which led to widespread shortages.

Mr. Díaz-Canel said in televised remarks on Sunday that the protests were a form of “systemic provocation” by dissidents doing the bidding of the United States. He said Washington in recent months had sought to destabilize and weaken the island’s economy as part of a policy designed to “provoke a massive social implosion.”

Granma, the Cuban Communist Party newspaper, said in a rare reference to demonstrations that people who took to the streets on Sunday included government supporters who “may have been confused by disinformation on social media.”

Gov. Ron DeSantis and Lt. Gov. Jeannette Nunez, whose father was a Cuban exile, have tweeted their support for the protestors.

Recommended
The Republican Status Quo is Officially Dead
Will Alexander

So far neither the State Department nor President Joe Biden have tweeted about the protests, though this piece will be updated if and when they do.