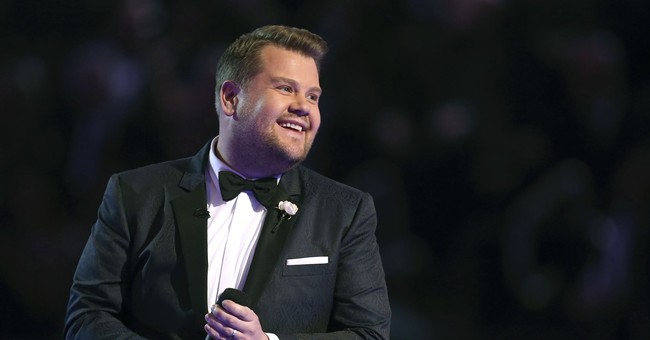 The "spill your guts or fill your guts" segment on James Corden's "The Late Late Show" is going through some changes after it was criticized for being culturally insensitive and for how "it does perpetuate the cycle of anti-Asian racism."

Kim Saira, described by CNN's Harmeet Kaur as "a 24-year-old Filipina and Chinese American activist," is circulating a petition calling on Corden to publicly apologize and donate to Asian American Americans because his segment treated popular Asian delicacies as "disgusting."

The segment--which wasreoccurring, at least until now--features celebrities who have to either answer uncomfortable questions, or eat one of the dishes before them. Dishes include chicken's feet, balut, century old eggs, and bird saliva. Asian dishes aren't the only ones used however. Other choices have included animal testicles, hot dog juice, and hot sauce & olive jello.

Kaur's piece focuses heavily on Saira, as well as on anti-Asian hate.

Balut is a dish that Kim Saira grew up eating with her grandmother and her cousins.

So when she first saw the Filipino street food snack featured a few years ago among a slate of purportedly unappetizing dishes on "Spill Your Guts or Fill Your Guts" -- a recurring segment on "The Late Late Show with James Corden," she was a little thrown off.

"I wasn't mad about it, but I was more so confused," Saira, a 24-year-old Filipina and Chinese American activist, said. "I was just wondering why they used a food that was so sentimental to my culture."

It wasn't just balut. Other episodes featured chicken feet, used in cuisines around the world; thousand-year-old eggs, a Chinese delicacy; and bird saliva, an ingredient Saira herself has eaten in soup.

The recent rise in hate and racism against Asian Americans and Pacific Islanders, though, got Saira thinking about "The Late Late Show" segment in a different light. She started questioning why it was still socially acceptable for Corden to present dishes routinely eaten by Asian people as "disgusting."

"If you don't like it, there's a way to be respectful about it," she added. "When a person who isn't involved in the culture whatsoever is adamantly profiting from it and showing it in a negative way, it's not right."

While Saira told CNN "I wasn't mad," she started a petition on Change.org. The petition has 44,505 signatures and counting, as of Saturday afternoon, with a goal of 50,000.

James Corden's The Late Late show features a segment called "Spill Your Guts," where guests either have to answer difficult questions he gives them, or eat the foods that are presented to them. The foods that are presented are meant to be "gross," as they are supposed to encourage the guest to answer his questions instead. However, many of the foods that he presents to his guests are actually from different Asian cultures. He's presented foods such as balut, century old eggs, and chicken feet, and which are often regularly eaten by Asian people.

During these segments, he's openly called these foods "really disgusting," and "horrific." In the wake of the constant Asian hate crimes that have continuously been occurring, not only is this segment incredibly culturally offensive and insensitive, but it also encourages anti-Asian racism. So many Asian Americans are consistently bullied and mocked for their native foods, and this segment amplifies and encourages it.

The media holds so much influence: according to Wikipedia, the Late Late show averages over 650,000 viewers per episode. That means, 650,000 people are being influenced to think that native foods from Asian countries are "disgusting," or "horrifying." Content like this continually perpetuates and encourages harm and racism against Asian Americans in our daily lives.

Changes being requested include:

Corden has addressed the issue on "The Howard Stern Show," with a CBS spokesperson directing CNN to those comments:

A spokesperson for CBS, which airs the talk show, referred CNN to comments Corden made on "The Howard Stern Show" last week.

"The next time we do that bit, we absolutely won't involve or use any of those foods," Corden said in the June 16 interview, when asked about the recent criticism. "As you said at the start, our show is a show about joy and light and love. We don't want to make a show to upset anybody."

Corden also noted that he didn't know when the segment would run again.

To Saira, though, the comedian's response fell short.

"In my petition, I have specifically asked for James Corden to publicly apologize on his show, and the reason why I was really specific about that was because I think that it is imperative for his hundreds of thousands of viewers to understand the harm that mocking these foods, rooted in Asian cultures, has on Asian people who still eat them," she said.

Neither CNN nor Saira mentioned that Congress passed "the COVID-19 Hate Crimes Act" with near unanimous support, which President Joe Biden signed into law last month.

Further, as Matt has consistently reported, the media ignores the real narrative of anti-Asian hate, which is that many of them are committed by Black perpetrators.

The clip below features Chrissy Teigen, whose mother is Thai. Teigen herself has also spoken about violence against Asian Americans, blaming it on "out of a long line of politicians," as Beth reported.