Joe Manchin Continues to Stick By Principles: 'I’m Going to Support Hyde in Every Way Possible.' 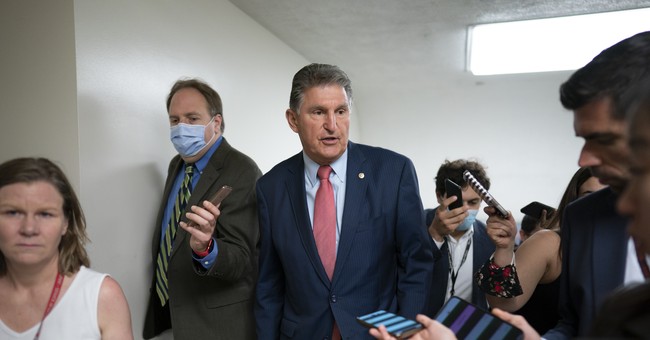 Sen. Joe Manchin (D-WV) continues to stick by his principles. On Thursday, he told Bloomberg that he will stick by his support for the Hyde Amendment, which protects taxpayers from having to fund elective abortions.

Manchin's stance would likely block a spending bill in committee if it doesn't include the ban on federal funds for abortion except in the case of rape, incest and to save the life of the woman.

Senate Appropriations Committee is evenly divided between D's and R's.

Democrats' plan to push a spending bill without Hyde was likely doomed because of the Senate's 60-vote threshold. But this is significant because Manchin is on the Appropriations Committee (and the HHS subcommittee) and could block it before it even gets to the floor.

Sen. Manchin was one of three Democrats who voted for an amendment to keep Hyde protections in the American Rescue Plan, joining Sens. Tim Kaine (VA) and Bob Casey Jr. (PA). Ultimately, the amendment failed, though the three Democrats still voted for the bill, which President Joe Biden signed into law.

As Townhall has covered, Joe Biden's $6 trillion budget proposal does not include the Hyde Amendment. Such a budget rider has passed with bipartisan support every year since 1976, including under the Obama administration, during which Biden served as vice president.

Like Sen. Steve Daines highlighted in an exchange with the pro-abortion radical HHS Secretary, Xavier Becerra, the Biden administration is full of "abortion extremism." One of the many reasons is because Sec. Becerra refused to answer how many late-term abortions would be performed on pain capable unborn children, with the use of taxpayer dollars.

The proposal has also earned criticism for its use of "birthing people" instead of "women" or "mothers." Sec. Becerra was unable to give a proper answer when questioned on the language by Sen. James Lankford (R-OK), though Acting Director of the Office of Management and Budget Shalanda Young doubled down on it.

GOOD! Joe Manchin has taken enough abuse from @TheDemocrats just for speaking his mind about bipartisanship and for sticking up for his constituents. Glad he is strengthening his resolve on his principles. Americans support Hyde because they do NOT want taxpayer funded abortions. https://t.co/3NQavrUoCf

Sen. Manchin already proved he was capable of standing up to the Democratic Party when he signaled not only was he not supporting the partisan "For the People Act," and that he would also continue to support the filibuster.