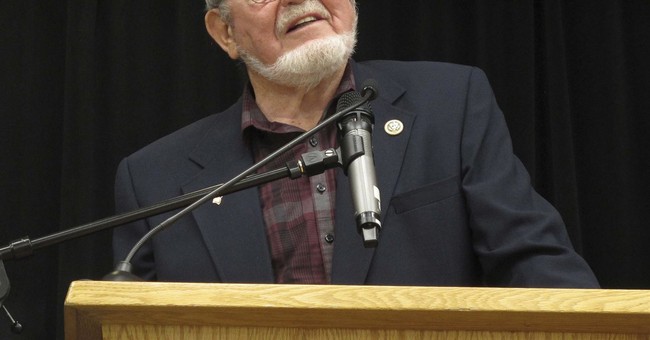 Have you ever wondered who the longest-serving Republican member of Congress is? That would be Rep. Don Young, the 87-year-old Republican who has represented Alaska's At-Large district since 1973. According to Suzanne Downing with Must Read Alaska, he just filed for reelection on Tuesday:

Congressman Don Young and Anne Young stopped by the Division of Elections in Anchorage on Tuesday and filed for the 2022 election. Young has been Alaska’s member of the U.S. House of Representatives since 1973 and is the longest continuously serving member of the House.

Considering Alaska has only been a state since 1959, Rep. Young is only the fourth congressman to represent the state.

Since there's a first time for everything, Rep. Young will face a jungle primary ballot, and rank choice voting will also now be employed. The new voting procedure could also help Sen. Lisa Murkowski (R-AK) who is facing primary challenger Kelly Tshibaka.

As Downing also reported, including comments from the congressman:

“There is no doubt that this has been a difficult time for our state. The pandemic has devastated our tourism economy, the new Administration has forced new resource exploration to grind to a halt, and extremists from the Lower 48 have only grown emboldened in their goal of locking up Alaska,” Young said. “With attacks coming at our state on all fronts, Alaska needs a proven leader to stand up and fight for the people of our great state. This is not the time to take risks on someone untested and unproven. That is why I have officially filed for reelection to serve as Congressman for All Alaska in the 118th Congress.”

He continued, “I always say that this has never been about Don Young. This is about Alaska and the people who call our great state home. My constituents need and deserve representation that listens to them and brings the Alaskan perspective to DC; that has always been my mission as your Congressman. Together, we have secured many wins for Alaska. Whether it is constructing the Trans-Alaska Pipeline, strengthening the fishing industry, obtaining funding for Alaska’s infrastructure, or working together to protect Alaska Native subsistence rights and culture, I have proven how to get big things done.”

Under current law, an individual using recreational or medicinal marijuana in legal jurisdictions can be disqualified from exercising their Second Amendment rights. When attempting to purchase a firearm, individuals must fill out U.S. Department of Justice Form 4473. Question 21 (e) requires the individual to attest that they are “not an unlawful user of, or addicted to, marijuana or any depressant, stimulant, narcotic drug, or any other controlled substance.” The form clarifies that “The use or possession of marijuana remains unlawful under Federal law regardless of whether it has been legalized or decriminalized,” potentially disqualifying individuals who use state-legal marijuana from gun ownership, or forcing them to risk perjuring themselves.

The GRAM Act provides a simple exemption for those who use marijuana in states or on tribal land where it is otherwise legal. Alaska legalized adult-use cannabis in 2014, and the overwhelming majority of Americans now live in a state with some level of legal use, yet Federal prohibition means their fundamental rights may be revoked. No law-abiding citizen’s Constitutional rights should be threatened by outdated federal policy. The GRAM Act not only protects Second Amendment rights, but also defends a state’s Tenth Amendment right to set their own cannabis policy.