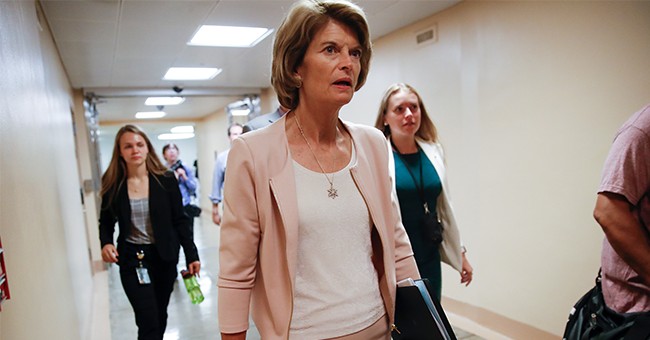 Alaska Senator Lisa Murkowski (R-AK) has an official primary challenger as of Monday morning. Alaska Commissioner of Administration Kelly Tshibaka is set to announce a challenge to Murkowski, while resigning her current post, Fox News reported.

Tshibaka plans to challenge the incumbent senator on issues including abortion, immigration, and the second amendment, while also highlighting that Murkowski was one of seven GOP senators to vote to convict former President Donald Trump for the horrific events of January 6.

In the opening day of her campaign, Tshibaka painted Murkowski as a swamp creature, leaning in on the incumbent's years in Washington, via Fox News:

"We know what Washington, D.C. thinks about Alaska: We’re here for their benefit, and we won’t put up much of a fight. After nearly 20 years in D.C., Lisa Murkowski thinks the same way," Tshibaka says in a video being released by her campaign Monday. "But you know what? Nothing scares the D.C. political insiders more than the thought of a strong, independent Alaskan leader in their ranks. One they can’t bully. One they can't control. One they can't silence...I'm running for the Alaskans who believe government is of the people, by the people, and for the people. The D.C. insiders need to be held accountable to us."

Trump also vowed to give Murkowski, and other lawmakers who voted to convict him, a tough challenge. Meanwhile, Alaska’s junior senator, Dan Sullivan (R-AK), vowed to defend Murkowski from primary challenges.