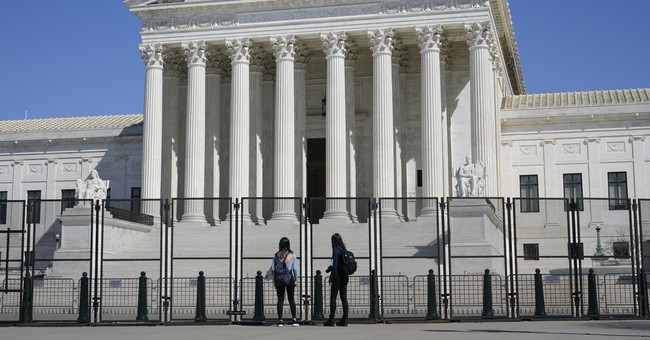 As Reagan reported this afternoon, "Far-Left Group Demands Liberal Supreme Court Justice Retire as Biden Considers SCOTUS Reform." The group in question is Demand Justice, which is targeting Justice Stephen Breyer, nominated by President Bill Clinton in 1994. It doesn't look like the White House is rushing to defend the associate justice any time soon, though, if at all.

While news of the campaign came on Friday, Brian Fallon, the executive director of Demand Justice, has a pinned tweet from March 17.

Today would be a very good day for Justice Breyer to announce his retirement. Apologies if saying so hurts your feelings!

Just had this sent to me: Spotted outside the Supreme Court.

Comes after our Playbook team previewed this am how activists are pushing “Breyer, Retire” and that this truck would be out and about.

It includes an online petition telling Supreme Court Justice Breyer to "put the country first" and retire so Biden can replace him + a billboard truck will be circling the Supreme Court.

Here's a photo of Demand Justice's billboard truck outside of Union Station. pic.twitter.com/2N1Md9WSiV

We need to start the process of confirming a Black woman justice now.

Happy anniversary of Justice Stevens announcing his retirement to all Stephen Breyers who celebrate!

We can't afford to risk Democrats losing control of the Senate before President Biden can follow through on his promise to nominate the first Black woman Supreme Court justice.

It's time for Justice Breyer to announce his retirement. pic.twitter.com/emqZ4Vc1FM

O'Keefe: Jen, thank you.  The President’s commission on expanding the Supreme Court is out.  We know he’s going to wait for the results.  What is the President’s view on the — of the calls for Justice Breyer to step down?

Psaki: He believes that’s a decision Justice Breyer will make when he decides it’s time to no longer serve on the Supreme Court.

O'Keefe: So should those groups pushing for him go back off?

Psaki:  think I can just speak to what the President’s view is of the Supreme Court justice’s ability to make his own decision.

O'Keefe: And outside the inauguration, when he was sworn in, has he had any conversations with Supreme Court justices?

Psaki:  Not that I’m aware of.  I’m happy to check if there’s anything we can read out.

President Biden will form a bipartisan commission to consider term limits and the size of the SCOTUS.

I support this and I believe we should add 4 Supreme Court Justices. This great video from @WeDemandJustice does a great job of explaining why we need to balance the court. pic.twitter.com/mn5wppIBna

Our statement on the announcement of President Biden's Court reform commission.

It's time to organize. pic.twitter.com/by6LTY1pQI

We can't wait for a commission made up of academics and Republican officials to decide the future of our Supreme Court. It's time to get to work.

Join us for an organizing call with @RepMondaire and @SenMarkey to get to work --> https://t.co/Xy7B9MSKQE

As Reagan also reported on Wednesday, Justice Breyer came out against court packing, warning it could "erode trust," and cautioned against making the Court political.

That's quite the convenient timing.

Demand Justice also targeted now Justice Amy Coney Barrett, with a focus on how while leaving church, as a private citizen, she signed onto a newspaper ad calling to "put an end to the barbaric legacy of Roe v. Wade and restore laws that protect the lives of unborn children."