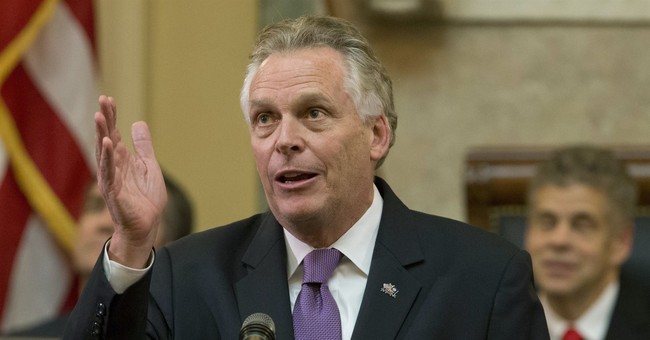 Former Virginia governor and current Democratic gubernatorial candidate Terry McAuliffe had a noteworthy moment during U.S. Rep. Gerry Connolly (D-VA) St. Patrick's Day Party on Wednesday in which he shared his condolences with the Asian Americans and Pacific Islanders community.

His comments were in response to the death of eight people, six of whom were Asian, across three different salons in the Atlanta area. The police have arrested and charged Robert Aaron Long with eight counts of murder and one count of aggravated assault.

Okay Terry we have just a few minutes here so do you want to do a message of solidarity to the AAPI community after the horrific shooting in Atlanta or a rowdy St. Patrick’s Day greeting—both? I don’t think there’s really time..... uhhhh ok

This is certainly one way to offer thoughts and prayers pic.twitter.com/ws32FBnQ38

In his closing, McAuliffe rushes off saying "And to the AAPI community today, our hearts are out to you for all you've done. Let's go Virginia. It's time to take it to the next level. Game on. Happy St. Patty's Day," while he takes a sip of his beer.

The video was shared by Eoin Higgins and Ryan Grim, both of the Intercept. Grim is also a contributor for the Young Turks. In other words, not exactly bastions of conservatism.

Other candidates for governor, as well as lieutenant governor, and attorney general spoke during the party, which took place over zoom. Connolly read results from a straw poll, in which McAuliffe won with 40 percent of the vote, with State Sen. Jennifer McClellan next in line at 30 percent.

McAuliffe was elected governor in 2013, in a close race against Ken Cuccinelli. The Virginia Constitution prohibits governors from serving back-to-back terms. McAuliffe's Twitter and campaign website both contained statements condemning the killings.