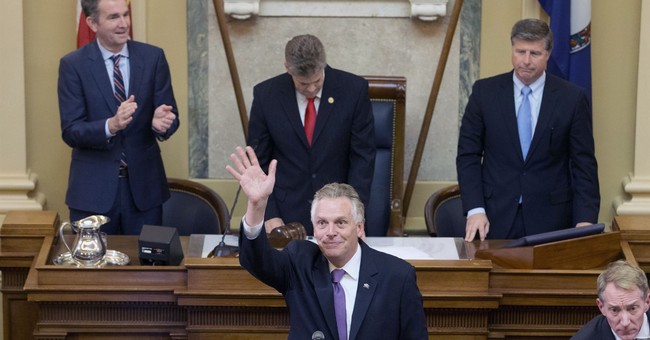 Another Democrat was caught violating COVID rules, specifically a mask mandate, on Tuesday afternoon. In a “rules for thee but not for me” moment, former Virginia Governor and current gubernatorial candidate Terry McAuliffe (D-VA), who is vying for his old job back, was caught maskless on two separate occasions on Tuesday, Fox News reported.

Terry McAuliffe, who supports mask mandates in Virginia, caught on Amtrak and in NYC train station without a mask. COVID can't spread on fundraising trips?

We are moving in the right direction under @POTUS’s leadership. Keep wearing a mask. Keep social distancing. Get the vaccine as soon as you’re able. Better days to come ?????? https://t.co/anJOwcg48C

The former governor's campaign did not address the photo, but rather accused GOP nominee Glenn Youngkin of being a "failure" for pandemic control.

"Glenn Youngkin has shown Virginians he will be a failure when it comes to controlling this pandemic and rebuilding Virginia’s economy," McAuliffe spokesperson Renzo Olivari told Fox News in part.

Youngkin's campaign said that McAuliffe is "all talk, no action."

"Terry McAuliffe said he wants to make life difficult for everyone else, but apparently he himself has difficulty taking the pandemic seriously and following federal law," spokesperson Christian Martinez said on Tuesday. "McAuliffe loves to play politics with COVID, but he failed his own leadership test when he traveled to a COVID hot spot, demonstrating once again that he is all talk and no action."

McAuliffe also falsely accused Youngkin of opposing COVID vaccines. The two face off in November in the first major electoral test for the Biden administration.