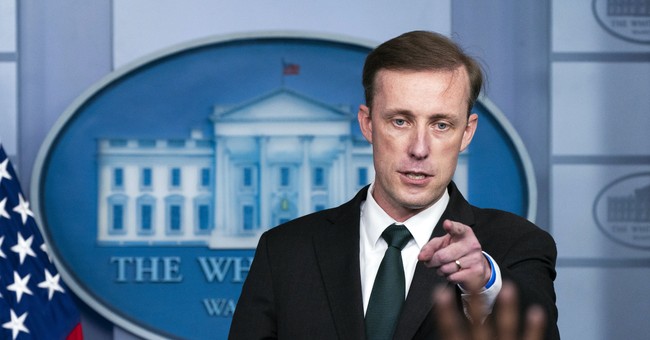 National Security Advisor Jake Sullivan denied reports that the Biden administration handed over a list of U.S. citizens, green card holders, and Afghan allies who are stuck in Afghanistan to the Taliban. One defense official quoted in Politico’s story referred to the situation as a “kill list” for Afghans:

“Basically, they just put all those Afghans on a kill list,” said one defense official, who like others spoke on condition of anonymity to discuss a sensitive topic. “It’s just appalling and shocking and makes you feel unclean.” (Politico)

Sullivan said that the report was untrue.

“We’ve given no list of all of the American SIV holders to the Taliban or any kind of big list,” Sullivan told CNN’s Jake Tapper on Sunday.

And over on CNN, Jake Tapper grilled NSA Jake Sullivan on the administration giving a "kill list" to the Taliban. Sullivan's argument was that they didn't give them "all" the names just small lists. But he couldn't say if the small lists were used against Americans or allies. pic.twitter.com/zflv5ZHoY0

Secretary of State Antony Blinken also denied the report of a "kill list," but conceded that specific names were shared with the Taliban in order to bring individuals to the Kabul airport.

On Meet the Press, moderator Chuck Todd pressed Secretary of State Blinken on the U.S. giving the Taliban what a Pentagon official called a "kill list" with American and ally names. Blinken denies it but then admits they handed them bus manifests with names. pic.twitter.com/CNTVpykufj

Tuesday marks the deadline to fully withdraw American forces from Afghanistan, and a growing number of lawmakers are not confident in the president's ability to get all Americans out.