Flashback: Biden Vowed to Use 'All Tools' to Protect Americans From Taliban 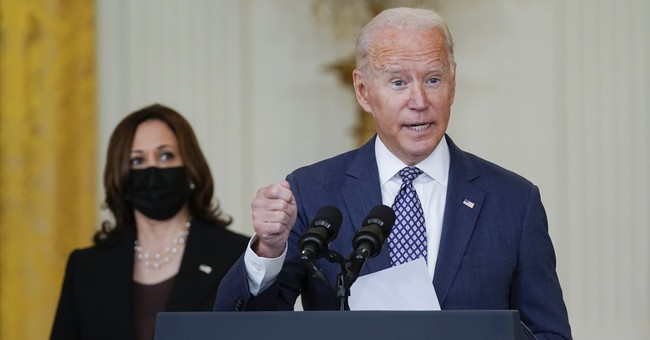 The situation in Afghanistan continues to escalate as the Biden administration is asleep at the wheel. On Thursday morning, explosions were reported outside of the Kabul airport as Americans continuously try to escape. President Joe Biden and his administration are under fire for the botched withdrawal from both Republicans and Democrats.

Earlier this year, Biden promised not to execute a "hasty" exit from Afghanistan, which is ultimately what was carried out. The president also vowed to defend Americans and Afghan allies "with all the tools" available but has yet to keep that promise.

"We will not conduct a hasty rush to the exit. We'll do it — we'll do it responsibly, deliberately, and safely. And we will do it in full coordination with our allies and partners, who now have more forces in Afghanistan than we do," Biden said in April. "And the Taliban should know that if they attack us as we draw down, we will defend ourselves and our partners with all the tools at our disposal."

The president also promised that a Taliban takeover was not inevitable.

"Because you — the Afghan troops have 300,000 —as well-equipped as any army in the world — and an air force against something like 75,000 Taliban. It is not inevitable," Biden said in July.

In July, Biden said the Taliban takeover was not “inevitable.”

This weekend, the Taliban took over Afghanistan’s capital city. pic.twitter.com/ZgXykfJfvn

As of yet, the president has not addressed the escalating situation in Afghanistan.