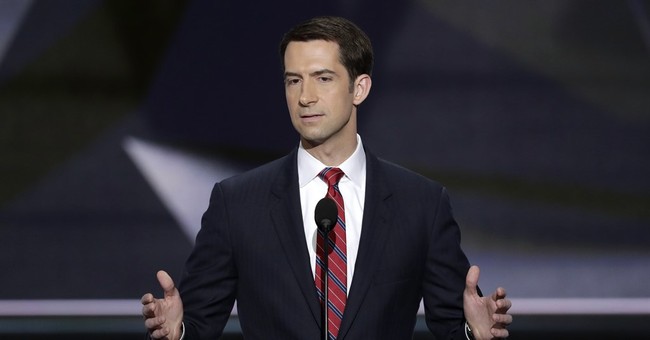 Another Republican lawmaker is calling for U.S. Olympic qualifier Gwen Berry to be removed from the national team after she disrespected the national anthem. Senator Tom Cotton (R-AR) said that if Berry, a hammer thrower, is “embarrassed” by the country, she should not compete.

“I don’t think it’s too much, when athletes who are competing, to wear the stars and stripes, to compete under the stars and stripes in the Olympics, for them to simply honor that flag and our anthem on the medal stand,” Cotton said on Fox News. “If Ms. Berry is so embarrassed by America, then there’s no reason she needs to compete for our country. She should be removed from the Olympic team.”

If Gwen Berry is so embarrassed by America, then there’s no reason she needs to compete for our country at the Olympics. pic.twitter.com/8OeXVOPqVd

Congressman Dan Crenshaw (R-TX) also called for Berry to be removed from the team. She claimed that she was "set up" by the timing of the anthem and elected to turn away.

As the national anthem played while Gwen Berry was on the podium after qualifying for the Olympics, she turned away from the flag and draped a T-shirt with the words "Activist Athlete" over her head.

She felt the timing of the anthem was "a setup": https://t.co/cE22DCQCxB pic.twitter.com/HPPnR2xXyr