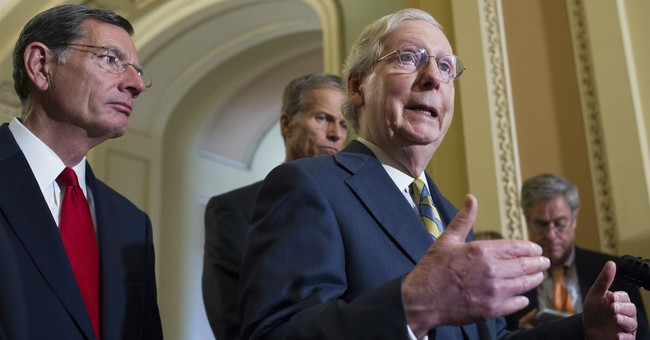 The Senate is set to vote on S1, also known as the “For the People Act,” on Tuesday afternoon. The legislation that is a cornerstone of the Democratic agenda is dead-on-arrival in the upper chamber, with bipartisan opposition.

There’s no rational basis for a federal government takeover of all 50 states’ elections.

For years, Democrats have been selling a partisan power grab. So far, the only thing bipartisan about it has been the opposition. pic.twitter.com/I2vk6Ywk3N

SEN. BLACKBURN: Americans staunchly believe in “one person, one vote.” Democrats' S.1 is designed to undermine the integrity of the electoral system and make it easier to cheat. pic.twitter.com/PFDvCyt8fT

SEN. CORNYN: It is pretty clear Democrats' S.1 is an effort to hijack state election laws for partisan advantage. They have created a false narrative of widespread voter suppression BUT that is already illegal under Section II of the Voting Rights Act and it's blatantly false. pic.twitter.com/2a3nYkGYXG

SEN. RICK SCOTT: Democrats' S.1 would take your taxpayer dollars and give it back to themselves.

That's wrong. We should never be taking taxpayer dollars and giving them to politicians to run attack ads. pic.twitter.com/cRyEqEx8iu

SEN. BARRASSO: Democrats' S.1 bill is designed to stack the deck and rig political elections in an effort to become a permanent majority party.

80% of Americans believe requiring photo ID to vote is appropriate. Democrats call it despicable but Americans call it common sense.

We should make it easier to vote and harder to cheat. pic.twitter.com/hA0JJG6lzl

Democrat leader Chuck Schumer (D-NY), on the other hand, is repeating debunked lies about voting reforms in red states.

The vote on S1 is set for Tuesday night.