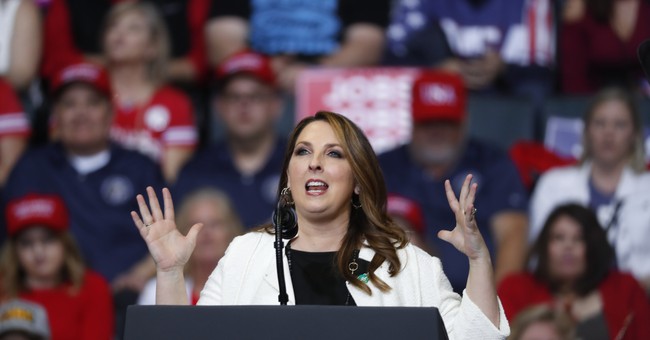 Republican National Committee (RNC) Chairwoman Ronna McDaniel launched a new podcast on Tuesday, to give a platform to Republican leaders to “share their successes.”

“America is an amazing country filled with wonderful people who do incredible things, but too often the media and liberal politicians ignore big parts of our nation and the people who make it work,” McDaniel said. “So I'm thrilled to speak with these amazing leaders and policymakers in our party who solve real problems every day, and help spread their message far and wide.”

“Pipelines are by far the safest way to move oil for people's protection. It also was wrong on the environment. It is much safer for the environment to move this oil through the pipeline than it is how we do it today, which is by truck and by rail, which includes a lot more potential for mishaps and spills and waste that could have been prevented,” Noem said of Biden canceling the pipeline. “So that's what I don't understand about it, is it was purely political. It was not in the best interests of our country, of our people, or our environment. So that's the kind of administration we're dealing with now, is that they are being political in all of their decisions and they don't care how it hurts people.”

He canceled the 4th of July celebration at Mt. Rushmore.

And he didn’t even call Gov. @KristiNoem to find out how his actions would impact the people of South Dakota.pic.twitter.com/zEPwcz0XmI

The popular governor added that President Biden never reached out to converse about the impact the cancellation has on workers in her state.

“No, it's been interesting because energy prices have gone up 30% just since he's been in office. So it has already taken money out of the pockets of people in South Dakota. We had many businesses, restaurants, hotels that had already expanded,” Noem said. “I went to President Biden's inauguration for that reason to show him that I was willing to have conversations and that I wanted to share a South Dakota story with him. And I have reached out extensively and no, there has been no willingness to have a conversation back.”

The president also recently canceled Independence Day fireworks at Mount Rushmore that Noem had previously authorized with safety protocols put forth by the National Guard. She concluded that individual governors will be tasked with “protecting states rights” under Biden’s rule.

“It's going to come down to governors. Really protecting states rights and how that impacts people in their state and fighting on every single one of these issues. And it's unfortunate because we'd way rather try to figure out ways that we could work together on the few issues we might agree on. But that doesn't appear to be the approach of the Biden administration,” she concluded.