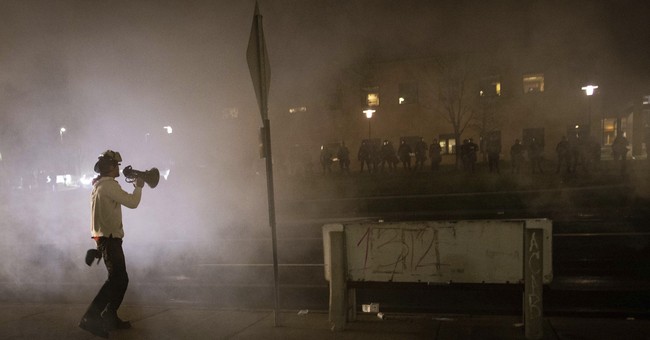 Riots erupted in Brooklyn Center, Minnesota on Monday night, for the second night in a row, after police released body camera footage of the fatal shooting of Daunte Wright. Law enforcement deemed Wright’s death a “tragic accident” after an officer accidentally deployed her service gun instead of a taser.

This is what the back and forth between the rioters and police looks like in Brooklyn Center, MN. pic.twitter.com/yb6e5TMG4m

Some Brooklyn Center stores are being protected by civilians with firearms. The looters have stayed away from these places. pic.twitter.com/fAcmYFxLG6

MN State Troopers used crowd control munitions after getting into a scuffle while trying to arrest some rioters. pic.twitter.com/LnhHh4RjNR

From earlier in the night: Police in Brooklyn Center, MN using flashbangs and pepper balls to push rioters away from the fence. pic.twitter.com/DLgTBkbLVw

Smoked poured out of the ransacked Dollar Tree while police move in to clear the crowd from the parking lot. pic.twitter.com/tM5yum8oOc

Earlier, local officials reaffirmed a commitment to protecting peaceful protests, but an eruption of violent riots occurred as the evening progressed on Monday night. Brooklyn Center Police Chief Tim Gannon said that "ravaging of our businesses," "the looting of our stores," and "the destruction to our pharmacies" do not qualify as peaceful protests, but that's exactly what happened on Monday night, once again. The recently-released body camera footage shows the "accidental discharge" of the officer's service gun.

Warning: Graphic footage, including the shooting

Here's the body camera footage of the killing of Daunte Wright that was just released. pic.twitter.com/A2X8qS8ZFH

Officials investigating Wright's death have indicated that they support firing the officer who shot him, after she was put on administrative leave.