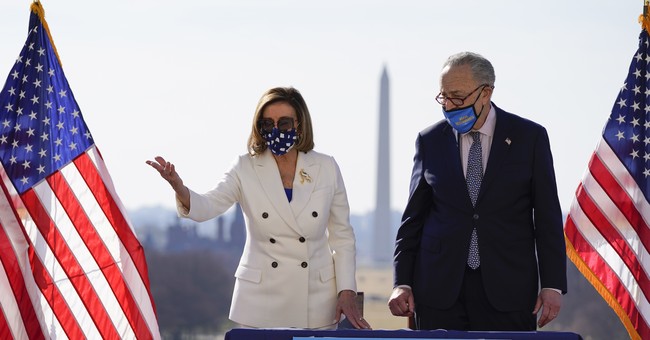 Democrat lawmakers in both chambers are under fire for the hefty price tag attached to their proposed “infrastructure” bill, which minimally focuses on real infrastructure progress. Just 5 percent of the proposed package is allocated toward tolls and bridges, while the remainder of the legislation includes funding for tax increases, provisions of the Green New Deal, childcare programs, and other unrelated spending items.

.@GStephanopoulos with a Q every @HouseDemocrats should answer on infrastructure: Only about 5% of this bill goes for tradt'l roads and bridges. You've got 20% caregiving for the elderly, about 13% for investments in the Green New Deal. Why not focus on tradt'l infrastructure? pic.twitter.com/cH6wMHUrS3

New polling shows that Americans want Democrats to answer for the contents of the “infrastructure” package. A recently-commissioned Harvard/Harris poll found that 80 percent are concerned about “wasteful spending” within the bill, while 64 percent are concerned about consumer prices increasing as a result of passing the package. The same poll found that those surveyed do not equate climate change or wealth distribution with infrastructure; 64 percent said that wealth inequality is unrelated to infrastructure, while 56 percent said the same of climate change.

Polling also showed that Americans are opposed to tax increases present within the package; the same Harvard/Harris poll shows that 84 percent of respondents want taxes to remain the same or be lowered, and 60 percent said that they are opposed to paying more for gas in order to fund the hefty legislation.

Business owners have also sounded off on the legislation, citing potential for slowed wage growth and reduced investments. If passed as the Biden administration hopes, the package would cost the economy nearly 1 million jobs, one study found.