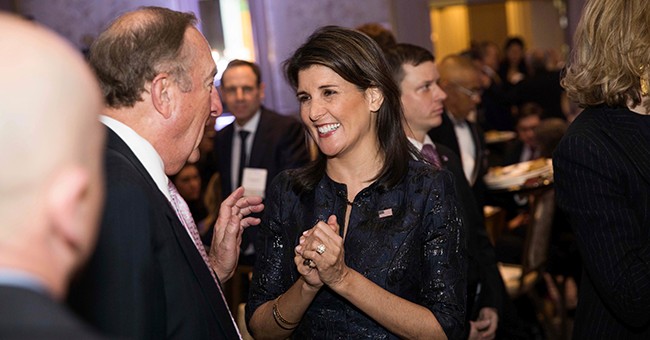 Former Ambassador to the United Nations Nikki Haley launched a political action committee to boost Republicans in the 2022 midterm elections, and that paves the way for a potential presidential run in 2024. Stand For America, the newly-formed PAC, is named after her political group.

Nikki Haley, meanwhile, launches Stand for America Pac that the likely 2024 candidate says will be "laser-focused on the 2022 midterms."

She told supporters in an email that her PAC will be “laser-focused on the 2022 midterms and electing a conservative force to the House of Representatives and U.S. Senate to serve as a bulwark against the liberal agendas of Joe Biden, Kamala Harris, Chuck Schumer, and Nancy Pelosi.”

As Democrats prepare to control both chambers of Congress and the White House, Haley said that it's crucial to "stand up for our founding ideas and American values."

"It’s more important than ever that we stand up for our founding ideas & American values. That means defending capitalism, protecting freedom, promoting religious liberty, & ensuring American security. It's why I launched Stand for America PAC," Haley said in a tweet on Wednesday.

Haley took aim at the Democratic majorities in both chambers of Congress, and at the legislative agenda sought by leadership.

“You can be sure the Democrats won’t abandon their big-government vision in 2022, including ‘defund the police,’ the Green New Deal, and Medicare for All,” she continued in an email. “They are simply ‘rebranding’ — which is just an attempt to hide the truth about what they really believe from voters.”

Haley is seen as a top contender for what will inevitably be a crowded GOP presidential primary in 2024.