Leader McConnell: Coronavirus Package with $2,000 Checks Has 'No Realistic Path' to Senate Approval 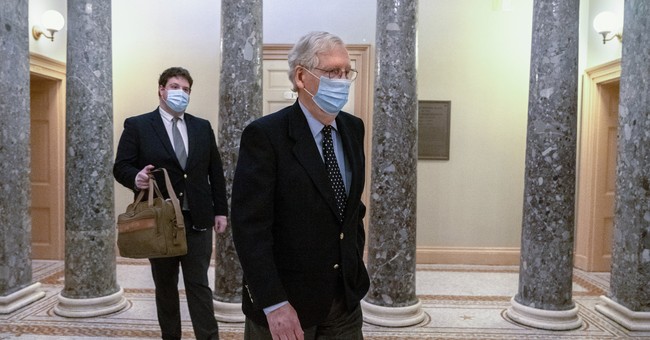 Senate Majority Leader Mitch McConnell (R-KY) said on Wednesday that the Senate will not immediately take up the COVID relief legislation passed by the House of Representatives, that would deliver $2,000 direct payments to Americans. Leader McConnell accused Democrats of attempting to send a “boatload of cash” to the wealthy, as opposed to Americans in need.

JUST IN: Sen. Mitch McConnell signals Senate will not take up #CASHAct: "The Senate is not going to be bullied into rushing out more borrowed money into the hands of Democrat rich friends who don't need the help." pic.twitter.com/MIjX0mzexe

McConnell pushed for targeted COVID relief, and said that the Senate will tackle a coronavirus stimulus package, reform to Section 230, and election integrity reforms all at once.

“The Senate will consider only smart targeted aid, not another fire hose of borrowed money that encompasses other people who are doing just fine,” Leader McConnell said. “The Senate is not going to split apart the three issues that President Trump linked together just because Democrats are afraid to address two of them.”

MCCONNELL: “Here’s the deal. The senate is not going to split apart the three issues that president trump linked together.”

So that’s where the senate is here today on Dec 30.

McConnell: Speaker Pelosi and leader Schumer are trying to pull a fast one on the President and the American people. First of all, they're hoping everyone just forgets about election integrity and big tech, they're desperate to ignore those two parts of President Trump's request.

President Trump continues to advocate for $2,000 direct payments, after he signed legislation for $600 stimulus checks.