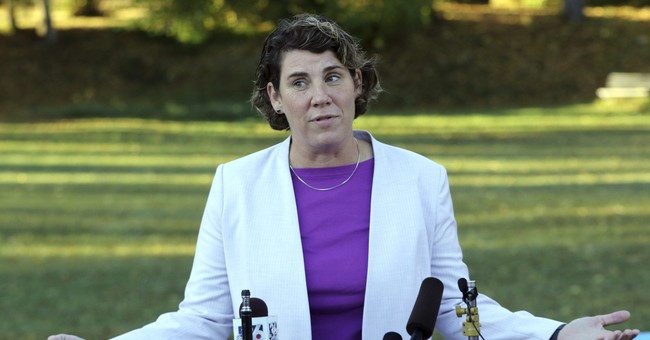 In Kentucky’s nationally-watched Senate race between Senate Majority Leader Mitch McConnell and Amy McGrath, the Democrat challenger was denied a crucial endorsement that is typically handed to Democrats.

The editorial board of Louisville’s Courier Journal, Kentucky’s largest newspaper, did not endorse McGrath ahead of Tuesday’s election. The editorial board has weighed in on Senate contests dating back to 1980, and typically endorses Leader McConnell’s opponent.

In McGrath’s contested primary, the editorial board endorsed her progressive challenger, Charles Booker. Given the board’s past endorsements in Kentucky Senate races, and with Democrats’ effort to nationalize McGrath’s candidacy, the board’s decision to not endorse Leader McConnell’s Democrat challenger is significant.

No Louisville Courier-Journal endorsement for the Senate race the weekend before the election...

...they weren't going to be endorsing McConnell, but to withhold an endorsement for McGrath would be notable.

This is such a big deal in KY. I’m not sure there is precedent for the CJ to ignore a senate race.
For context, they endorsed Grimes in ‘14 a couple weeks after eviscerating her for failing to disclose who she voted for in the 2012 election. https://t.co/b0BWsyknMu

The largest newspaper in Kentucky is sitting out the Senate race. Stunning. Amy McGrath must be preparing for a crash landing. https://t.co/YOrotJ22NZ

Democrats pumped over $100 million into Kentucky’s Senate race, but McGrath’s bid to unseat the GOP’s most powerful legislator was a long-shot from day one. Well on his way to another term in the Senate,  Leader McConnell’s reelection is rated as “likely Republican.”