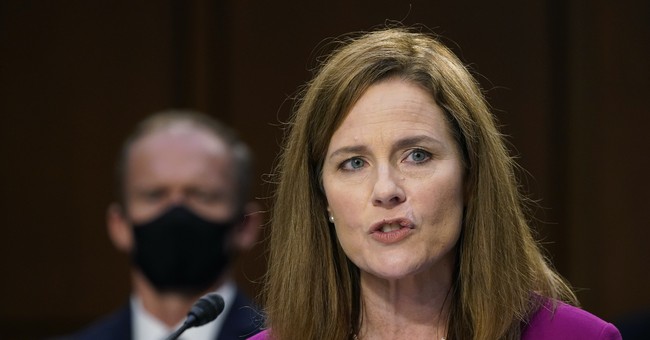 The question and answer portion of Judge Amy Coney Barrett’s confirmation to the Supreme Court is underway before the Senate Judiciary Committee.

Democrat ranking member Sen. Dianne Feinstein (D-CA) pressed Judge Barrett about hypothetical legal battles that she could be compelled to rule on if confirmed to the high court, including abortion, the Affordable Care Act (ACA) and campaign finance. Judge Barrett came prepared for “gotcha” questions from Democrat members of the committee, but declined to answer hypothetical questions.

As @SenFeinstein continues to ask Judge Amy Coney Barrett how she'll rule on potential cases before the Supreme Court and if she agrees or disagrees with certain opinions written by the late Justice Antonin Scalia, Judge Barrett quotes the late Justice Ruth Bader Ginsburg. pic.twitter.com/SYQOKHwCz1

Judge Barrett’s avoidance of hypotheticals mirrors the rule established by the late Justice Ruth Bader Ginsburg during her own confirmation. Justice Ginsburg famously said that it would be wrong to preview how she would rule on certain legislative cases before she was seated on the bench.

The Ginsburg Standard - “no hints, no forecasts, no previews” on cases that may come before the Court pic.twitter.com/ZauKvmuFKU

In response to hypothetical questions, Judge Barrett told Sen. Feinstein that the only commitment on her agenda is upholding the rule of law.

Recommended
Female UPenn Swimmer: Lia Thomas ‘Was Not Even Close’ to Being Competitive as a Male
Madeline Leesman

Judge Barrett tells Sen. Feinstein: “I don’t have any agenda” other than “to stick to the rule of law” #ConfirmACB pic.twitter.com/SrfvRox1Mz

Follow our coverage of the second day of Judge Barrett’s confirmation here.