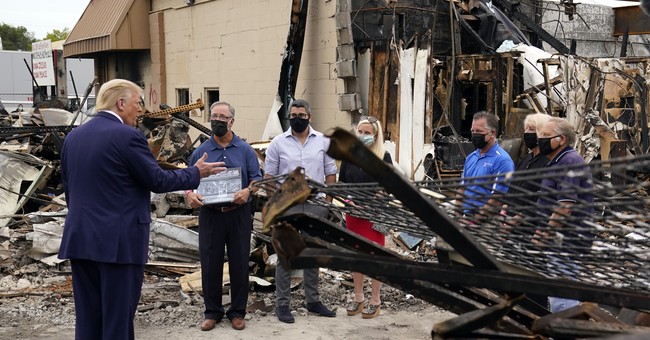 President Trump signed a memorandum on Wednesday that takes aim at implementing accountability measures for local politicians in cities facing violent unrest. Lawmakers in these cities that are predominately run by Democrats have refused to condemn the violent riots disguised as “peaceful protests.” The memorandum aims to defend communities, protect taxpayer dollars and promote a return to law and order.

“The Federal Government provides States and localities with hundreds of billions of dollars every year, which fund a wide array of programs, such as housing, public transportation, job training, and social services.  These funds have been collected from American taxpayers who entrusted their money to the Federal Government to serve our communities and our citizens,” the memorandum reads. “My Administration will not allow Federal tax dollars to fund cities that allow themselves to deteriorate into lawless zones.  To ensure that Federal funds are neither unduly wasted nor spent in a manner that directly violates our Government’s promise to protect life, liberty, and property, it is imperative that the Federal Government review the use of Federal funds by jurisdictions that permit anarchy, violence, and destruction in America’s cities.”

The Trump administration has demonstrated a zero-tolerance policy toward the violence and rioting that is plaguing a handful of major cities, when Democrats shrug the unrest off as peaceful and justified.

"American taxpayers who fund the great programs that our cities rely on deserve to be protected by their local city officials. We are taking action by exploring all options to ensure Federal resources flowing to lawless cities aren’t being squandered," said Office of Management and Budget Director Russ Vought. "The lack of law and order surrounding these riots, and response from local leadership, is a dereliction of duty. Our men and women in blue cannot be handcuffed by local leadership in their efforts to respond to riots and protect their fellow citizens."

The memorandum will hopefully compel local Democratic lawmakers to condemn the violent riots, and put the best interests of their cities first.