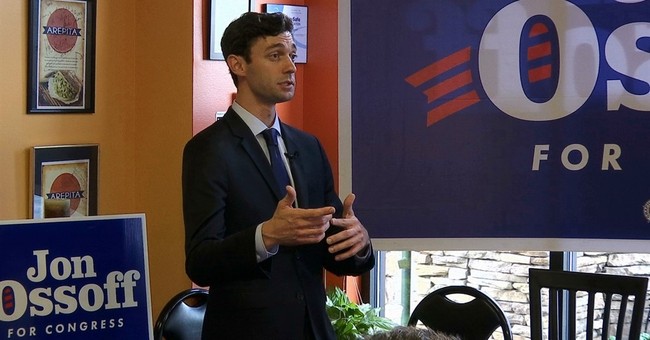 Georgia Senate hopeful Jon Ossoff has spent the first week as Democrats’ official nominee by flip-flopping on the controversial issue of “defunding the police.” Originally an idea that solely existed on the far-left, the movement to “defund” law enforcement is gaining momentum within the mainstream wing of the Democratic Party.

Leading up to last week’s Senate primary, Ossoff was unresponsive to direct questions about his stance on the fringe movement, and recently doubled-down on his refusal to condemn or endorse the idea of “defunding the police,” claiming that he supports “reforming and demilitarizing policing in America” without taking a direct stance on “defunding.”

Despite his previous avoidance of confrontation with the issue, Ossoff flirted with the line of endorsing “defunding the police” during an interview with Atlanta’s WAOK, as Washington Free Beacon reported on Monday. Ossoff claimed that funding must be “on the line,” for departments that violate his proposed national standard for “use of force.”

The Atlanta Journal Constitution (AJC) pressed Ossoff on his change in rhetoric on Tuesday morning, but diverted to the stance of Democratic nominee for president, Joe Biden. Ossoff said that his stance “mirrors” that of the former vice president, who stands against “defunding” law enforcement.

Ossoff’s 180-degree spin in language, coupled with his continued refusal to directly condemn or endorse the movement to "defund the police," makes his stance unclear. Defunding law enforcement is a grave and consequential proposition, especially when no real replacement for combating crime is proposed by those who push to do so. Ossoff’s opponent, GOP incumbent Sen. David Perdue (R-GA), condemned “defunding the police” as “outrageous.”

Defunding the police is an outrageous idea, yet my opponent still refuses to say if he supports this radical movement. I have called for police reform to ensure our laws are enforced fairly for all members of our community. #GAsen #GApol

"Jon Ossoff's shameless pandering on an issue as serious as funding our law enforcement shows how two-faced he really is," said Perdue for Senate Communications Director John Burke. "Ossoff clearly lacks the courage and conviction to tell Georgians what he really believes, so he's simply telling whatever audience he's in front of what he thinks they want to hear. He's just another politician willing to say whatever it takes to win an election."

Sen. Perdue rightfully pushed Ossoff, and his former primary rivals, to take a direct stance on the issue. As Democrats seek to make Georgia a battleground state in November, Ossoff should make clear his stance on “defunding the police” for the sake of transparency, as such a fringe idea comes with real consequences for those who he seeks to represent in the Senate.