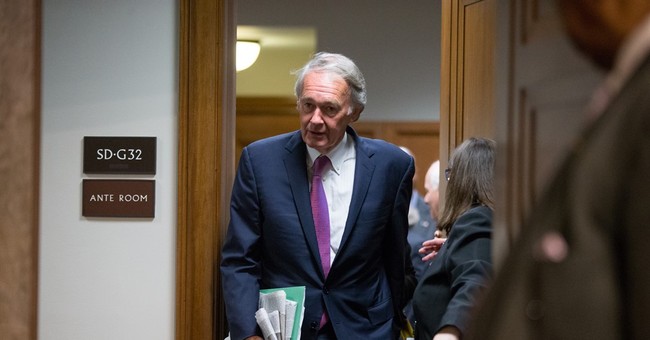 Senator Ed Markey (D-MA) came out in favor of defunding law enforcement, in some capacities, during a debate on Monday night, as the fringe movement gains traction on the Left.

“Let’s fund healing, not harming. We can start with banning the use of tear gas by law enforcement, and to stop equipping police who are supposed to keep the peace with weapons of war,” the Massachusetts Democrat said. “We should shift funding from law enforcement and toward more nurses and social workers in our neighborhoods who can respond to challenges such as homelessness and overdoses.”

Sen. Markey faces a primary challenge from Congressman Joe Kennedy (D-MA), and seeks to remain the progressive choice in the nationally-watched Senate contest. Sen. Markey’s stance on “defunding” police is one of the first from Democratic senatorial candidates, and raises questions about other Democratic candidates for the Senate hoping to unseat Republicans in November. Thus far, no Democratic Senate hopefuls, even in battleground states, have condemned the movement outright.

Sen. Markey has fundraised with high-profile candidates hoping to flip Republican seats in November, including Arizona Democrat Mark Kelly. Sen. Markey and Kelly joined together for a joint fundraising committee, Blue Senate 2020, from which Kelly took in just under $35,000, as of the end of 2019. While joint fundraising efforts between candidates are procedural, Kelly’s silence on the fringe “defund the police” movement as embraced by Sen. Markey’s, certainly raises questions about Kelly’s stance.

“What once lived on the liberal fringe has now broken through in a serious way," said NRSC Communications Director Jesse Hunt. "Senate Democrats everywhere are going to have to answer to voters about how they plan to keep Americans safe while their party seeks to ‘defund the police.’”

Democratic nominee Joe Biden’s campaign indicated that the former vice president does not support the movement to “defund the police,” and candidates hoping to represent their states in the Senate should have to take a stance, too.