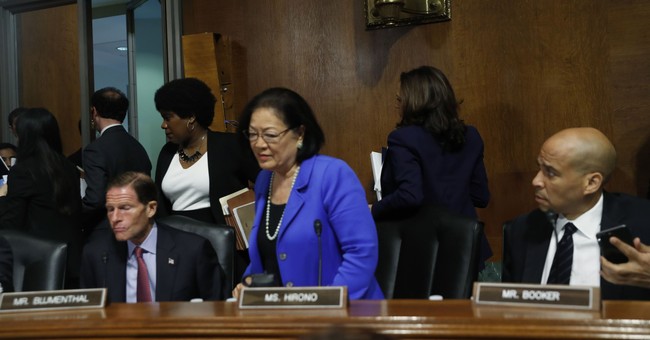 The Judicial Crisis Network rolled out an ad buy attacking Democrats, particularly in the United States Senate, for hypocrisy in dealing with sexual misconduct allegations. The group is dedicated to putting judges who will promote individual liberty and judicial fairness on the federal bench, and played a decisive role in Justice Brett Kavanaugh’s confirmation to the Supreme Court. The six-figure ad buy hits Democrats for their deafening silence surrounding Tara Reade’s allegations of sexual assault against Joe Biden, as he assumes the Democratic nomination for president. Every lawmaker and Democratic figure mentioned in the ad went after Kavanaugh while he was accused of misconduct, with a less-substantiated case against him, and demanded that everyone “believe women,” but now have nothing to say to Tara Reade.

Democrats only believe the woman when believing the woman helps Democrats. pic.twitter.com/ND23L5qnTr

Indeed, Democrats in the Senate used the allegations from Dr. Ford against then-Judge Kavanaugh as an avenue to derail his confirmation to the high court and execute a character assassination campaign. Of course, these lawmakers had already publicly voiced their opposition to then-Judge Kavanaugh ideologically, and vowed to vote no; Dr. Ford’s claims were shamelessly used as an excuse for Democrats to oppose Kavanaugh without appearing partisan. In the Fall of 2018, during this hyper partisan confirmation process, Senate Democrats threw their support behind Dr. Ford, and demanded that the judge’s nomination be rescinded, as the ad points out:

“She told a story that was hard to tell,” said Sen. Elizabeth Warren (D-MA) of Dr. Ford; “I believe her. She is putting herself out there,” said Sen. Kamala Harris (D-CA); “I believe the survivor here,” Sen. Richard Blumenthal (D-CT) told reporters; “Women do not sit around making these things up,” Sen. Mazie Hirono (D-HI) said in response to questions of Dr. Ford’s credibility.

“The Kavanaugh allegation and how it was handled by the Left has turned out to be the perfect foil for the Biden allegation and a master class in hypocrisy. The contrast between the Democrats’ outrage in 2018 and their silence in 2020 could not be starker,” Severino said in a statement. “In 2020 it’s now Joe Biden who is accused. Gone is the Democrats’ outrage. Yet the truth from 2018 remained unchanged: for the Left, it’s all about politics and power.”

The ad buy will run in California, Alabama, Massachusetts, Michigan, and the Washington, D.C. area.