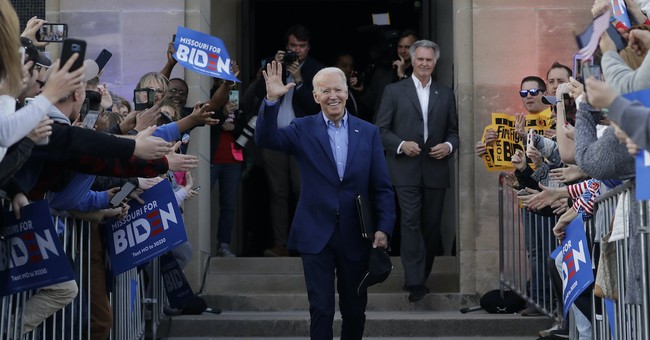 Just as his path to the Democratic nomination is clear, former Vice President Joe Biden faces questions in regards to allegations of sexual misconduct from former aide to then-Senator Biden, Tara Reade. Democrats and Biden’s allies on the cable news circuit have done their best to cover for the former vice president, but the credibility of Reade’s story continues to grow as her claims are bolstered by evidence and corroboration.

Democrats threw out their original “believe all women” standard for misconduct allegations that was spearheaded by Senate Democrats during their character assassination of Justice Brett Kavanaugh in the fall of 2018, and have moved to damage control mode in order to shield Biden from accountability to these claims.

Buzzfeed originally published talking points for Democratic candidates that were drawn up by the Biden campaign. The memo instructs Democrats to categorically deny Reade’s claims and stand in solidarity with the former vice president if asked about the allegations:

“Biden believes that all women have the right to be heard and to have their claims thoroughly reviewed,” the talking points read, according to a copy sent to two Democratic operatives. “In this case, a thorough review by the New York Times has led to the truth: this incident did not happen.”

“Here’s the bottom line,” they read. “Vice President Joe Biden has spent over 40 years in public life: 36 years in the Senate; 7 Senate campaigns, 2 previous presidential runs, two vice presidential campaigns, and 8 years in the White House. There has never been a complaint, allegation, hint or rumor of any impropriety or inappropriate conduct like this regarding him — ever.”

Biden’s campaign also cites The New York Times’ story that exonerated the former vice president, claiming that NYT “investigated” Reade’s claims. The puff piece published in defense of Biden was not only unfair to Reade, but also did not actually investigate her claims. NYT cleared Biden of guilt purely on the word of his campaign and a few of his staffers from his tenure in the Senate. NYT’s exoneration occurred before new evidence and corroboration from Reade’s family and friends became public knowledge, but NYT has published no follow-ups thus far. The Times’ take on the allegations against Biden represents a 180-degree spin from their coverage of the claims against Brett Kavanaugh; this same newspaper ran with the claims of Dr. Ford, Julie Swetnick and Michael Avenatti on face value, while piling onto the character assassination against the future Supreme Court Justice and putting due process on the back burner.

Biden’s campaign also wrote off Reade’s allegations as “so wildly out of character for Joe Biden.”

The full exchange between Sen. Kirsten Gillibrand and the reporter asking about Tara Reade's allegations: pic.twitter.com/W7pKFvsjBu

Here's Buzzfeed catching @JoeBiden's campaign falsely telling surrogates that @nytimes did a "thorough review" of Tara Reade's allegations & found that "the incident did not happen."

The former vice president deserves due process in the face of these allegations, just as Reade deserves to be heard. Interestingly enough, it was Senate Republicans and soon-to-be Justice Kavanaugh who called for an investigation in order to be fair to Dr. Ford in the fall of 2018; in a similar situation, with even more corroborating evidence, Biden remains silent. More light could be shed on these allegations if Biden would unseal the entirety of the documents related to his 36-year tenure in the Senate, which are currently under lock at the University of Delaware until Biden leaves “public life.” If Reade's claims are so categorically false, as Biden's campaign-not Biden himself-claim, why not release the records to the public?

Despite the discrediting treatment Reade is receiving from her own party, the same Democratic Party claiming to be the party of supporting and believing women, the former Biden aide vowed to not back down.