Gov. Whitmer on Backlash in Michigan: 'Let's Not Get Overly Political' 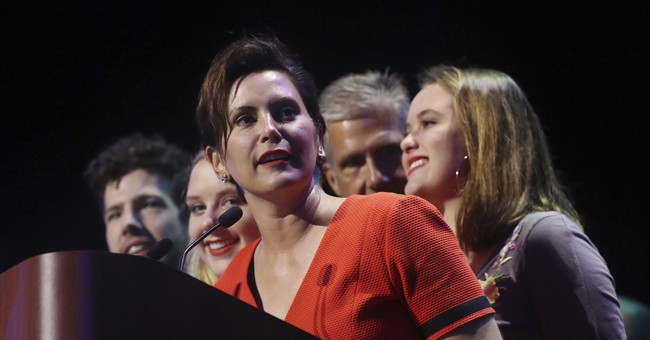 Michigan Governor Gretchen Whitmer (D-MI) recently emerged as a favorite of the cable news circuit, as she keeps intact a strict executive shelter-in-place order in her state during COVID-19. The order has been criticized as an unconstitutional overreach by Republicans and Democrats alike.

In response to the backlash, Gov. Whitmer continues to double down on her order, and insists that protests against her executive action are “irresponsible:”

WATCH: Gov. Whitmer tells @Maddow that Wednesday's protest at Michigan's Capitol is the “kind of irresponsible action that puts us in this situation where we might have to actually think about extending stay-at-home orders, which is supposedly what they protesting." pic.twitter.com/WxVtTVEeia

During an appearance on "Good Morning America" on Friday morning, Gov. Whitmer asked that people “not get overly political,” in response to a statewide protest, and sheriffs in Michigan refusing to enforce her far-reaching order:

On GMA, Gov. Whitmer responded to the sheriffs in Northern Michigan who said they won't be as strict in enforcing Whitmer's executive orders. "If it makes people feel better to take their frustration out on me, that's fine. All I ask is let's not get overly political here."

These remarks come just two weeks after Gov. Whitmer infamously appeared on The Daily Show with Trevor Noah, wearing a t-shirt that says “That woman from Michigan,” as a reference to President Trump addressing her by name:

Gov. Gretchen Whitmer, in a 'that woman from Michigan' shirt, on The Daily Show with Trevor Noah last night https://t.co/6yIOSoV5ZP pic.twitter.com/VcUdudSWdt

Obviously, Gov. Whitmer used this appearance as an excuse to score political points as she eyes as a vice presidential tap.

Gov. Whitmer may be able to convince former vice president Joe Biden of her ability to govern, but her constituents evidently see right through her political games.