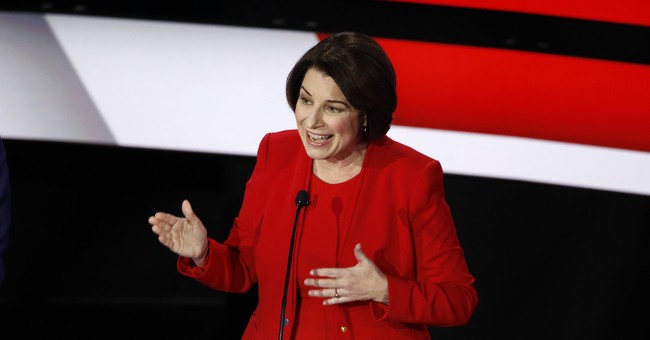 Medicare for All sounds very nice when floated by politicians, which the slight popularity of the government overhaul legislation can be attributed to. However, polling shows that when confronted with the vast cost and tax increases that inevitably come with Medicare for All, those favorability numbers dwindle. The average American voter does not want to abolish private insurance, which is also a prerequisite for Medicare for All.

Sen. Klobuchar knows this to be true, and managed to nail Sen. Elizabeth Warren on the inconvenient economic and political realities of Medicare for All:

Klobuchar to Sanders on Medicare for All: "What I don’t agree with is his position on healthcare. This debate isn’t real. … Over two-thirds of the Democrats in the Senate are not on the bill that the bill you and Senator Warren are on."

Sen. Klobuchar took Sen. Warren to task over her "Medicare for All" proposal: "You would kick 149 million Americans off their current health insurance." pic.twitter.com/XHf5VPyE1V

Although still costly and destructive to the economy, the healthcare plans pushed by Sen. Klobuchar, Pete Buttigieg and former Vice President Joe Biden are more favorable with the American people, and Sen. Klobuchar appears to be in touch with this reality.