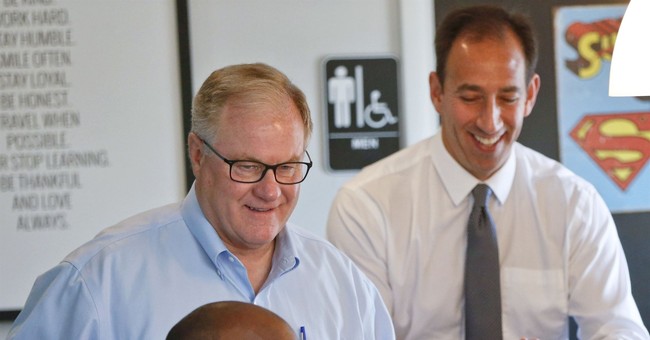 Republican gubernatorial candidates Scott Wagner and Jeff Bartos, running to unseat Governor Tom Wolf and ensure that his running mate, a self-declared socialist, no longer control the Commonwealth, launched their town hall tour of Pennsylvania. The pair walked into a room of supporters and potential constituents, giving the GOP candidates a standing ovation and roaring applause.

Wagner and Bartos invited Governor Tom Wolf and his running mate, Braddock Mayor John Fetterman, to jointly participate in this series of town halls across the state, but the Democratic duo declined. to sit beside the Republican ticket and engage with their constituents. Bartos stressed that their Democratic counterparts are welcome at any of the campaign’s town hall events, despite Wolf and Fetterman’s initial snub of the invitation:

"The Governor has not responded or rejected every entreaty that we've given him to join us in these town halls, and so we'll say that every one of these, the Governor and his running mate Mayor Fetterman are welcome," the Lieutenant Governor nominee said.

Wagner opened the town hall by shredding Wolf’s policies, which once earned him the title of most liberal governor in America in 2015, that have stunted Pennsylvania’s economic growth and not allowed the Commonwealth to reach its full potential for job growth. The GOP candidate, a former state senator, saw first-hand just how devastating Wolf’s economic policies were to the average Pennsylvanian. In just one sentence, Wagner underscored just how different his administration’s economic policies would be than that of Governor Wolf:

“I want to protect your paychecks,” the GOP candidate said.

The GOP duo, both of whom have backgrounds in business and real estate, answered questions about their policy stances and plans on a range of issues including pensions, the growing opioid crisis, lowering the taxes implemented by Governor Tom Wolf and education funding. The idea of town halls, which allow the running mates to directly engage with constituents from all walks of life and areas in the Commonwealth, are unique and different from any constituent event held by Governor Tom Wolf in his tenure.

Aside from the Wagner-Bartos ticket’s uniquely conservative ideas for the Commonwealth, after four years of unsigned budgets, tax increases and economic decline courtesy of Governor Tom Wolf, the duo also uniquely complement one another. It is clear to constituents who see the GOP pair interact that the two are great friends and share a mutual respect. This kind of alliance between Governor and Lieutenant Governor candidates is not something that Commonwealth voters saw during Governor Wolf’s election and tenure in the Governor’s mansion. Wolf and his Lieutenant Governor Mike Stack have never come across as dynamic as Wagner and Bartos do, and Wolf distanced himself from Stack after allegations of Stack abusing his staff surfaced.

Recommended
Pfizer CEO Gets COVID Two Months in a Row...Twitter Users Have Some Thoughts
Leah Barkoukis

The Wagner-Bartos campaign will continue to travel across the Commonwealth and talk to voters about issues that matter to them, and changes potential constituents would like to see across the board. The next town hall is set for Saturday in Northhampton County.