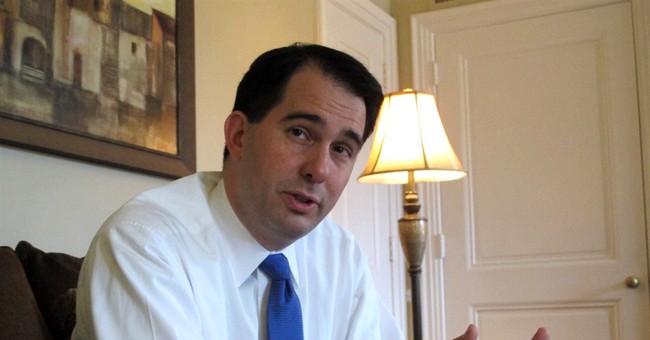 Wisconsin Governor Scott Walker criticized the partisan climate in Washington and distinguished proper checks and balances from today's gridlock. He said, "If you want to get big bold reform done ... you need a team to help you do that."

Governor Walker gave the talk while touring to promote his book, Unintimidated: A Governor’s Story and a Nation’s Challenge. (The Christian Science Monitor provides some quick takes on the book here.)

The author's tour has itself been deemed newsworthy because many have speculated it hints at 2016 presidential ambitions. Governor Walker himself has been outspoken about how governors make better presidential candidates in general.

Yet his comments today about divided government are unique. Governor Walker is right that the "conventional wisdom" is that divided government is good. The logic follows that if one party controls all three branches then the federal government could devolve into a tyranny of the majority. Nevertheless, The Washington Post reports that he challenges that idea head-on (emphasis mine):

But, he added, "I think they've seen the last few years that that's not necessarily a good thing. Instead of sufficient checks and balances, what that's gotten is a lot of gridlock."

Walker was referring to divided government in Washington, which contrasts with the situation in Wisconsin. Republicans have controlled both chambers of the state legislature there since 2010. The unified structure has allowed Walker to spearhead an ambitious GOP agenda, including his most controversial law, a measure that curbed collective bargaining for most public employees.

His perspective is unique because his state is controlled by one party. Governor Walker took this idea to its logical conclusion in talking about the importance of Congressional races preceding the 2016 election (emphasis mine again):

Walker said he is focused on 2014 not just because of his own election, but also because what happens in 2016 won't "matter as much" if there isn't a likelihood that a Republican president would have control of both chambers in Congress.

Do Americans agree with Governor Scott Walker? Is it time to forget divided government and celebrate one-party control? It will not be clear until 2014.