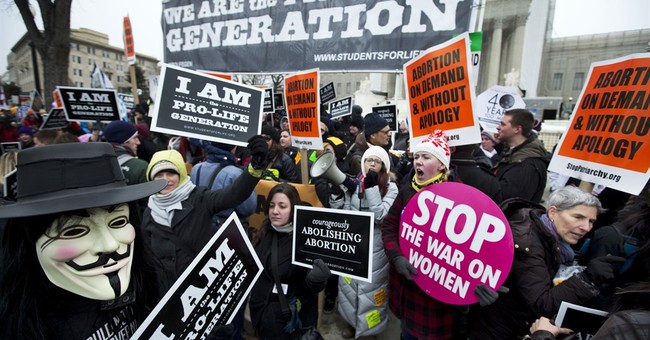 A new campaign conflates wildly different realities, putting restrictions on all birth control (Philippines) and the criminalization of miscarriages (El Salvador) on the same level as abortion clinic regulations (North Dakota, USA) and the presence of pro-life demonstrators (Texas, USA).

The descriptions of pregnancy as an "inescapable curse" and "death sentence" do not come from the makers of the video, but from liberal promotion site Upworthy, which encourages women to "enjoy the miracle of life on their terms."

Even without the heinous commentary of Upworthy, the video is disturbing all on its own. The full video, which is part of the Draw the Line "abortion rights" campaign, is below. (It is 8 minutes, 19 seconds long - but it is worth seeing in its entirety.)

The video begins with a legitimately distressing look at the trials women have to face in other countries. Specifically, a woman in the Philippines tells a story about how birth control is completely restricted yet her husband forces her to have sex when they cannot afford to support another child. A woman in El Salvador shared her harrowing experience of miscarriage that resulted in her arrest and accusation of murder. These two cases would appall any reasonable American.

Nevertheless, the video was not meant to remain sane for too long. The stories move from El Salvador to... North Dakota. The message that Draw the Line sends is that the strict requirements for abortion clinics that have left only one remaining fall under the same category as criminalized miscarriage. An abortion supporter laments how someone once called her a member of the "Satanic Nazi Abortion Death Squad." She thereby further degrades the intense and unimaginable struggles of the women interviewed just minutes before by complaining about name-calling.

Another activist characterizes the pro-life movement as one whose goal it is to "stigmatize" and "shame" women - not to save a human being. A third woman says she "doesn't feel it's fair for me to be influenced and persuaded" by pro-life demonstrators. She never takes a moment to consider why is it that women heading into the abortion clinic might be influenced and persuaded in the first place. She does not admit that if they were certain in their hearts that abortion was the right thing to do, then they wouldn't have to worry so much about pro-life influences.

One of the most difficult and emotional parts of the video is filmed in Texas, where an abortion doctor describes how a 16-year-old crossed the border to Mexico to receive an unsafe abortion that left her so badly infected that he had to give her a hysterectomy to save her life. Nobody would deny that that story is an unforgivable tragedy. But it is chilling that abortion activists believe that the only problem with that story was that abortions were too hard to get in Texas.

So many factors have contributed to this crisis on a societal scale, including a decline in sexual morality, aversion to the child-centered traditional family, ignorance about birth control, lack of parental support, and absence of community acceptance in the face of widespread stigma. The reality is that progressive activists haven't presented any other solution than "abortion on demand and without apology."

The women in the beginning of the video face immense difficulties, and it is a fact that women's rights have not yet been realized in many places around the world. However, the women in North Dakota and Texas are suffering less from injustice than from their own victim complexes.

The Center for Reproductive Rights should not bite off more than it can chew. It will have a hard time making a difference in the lives of women abroad if it continues to fabricate oppressions in America.