McCain: Hillary 'You've Got to Move On' 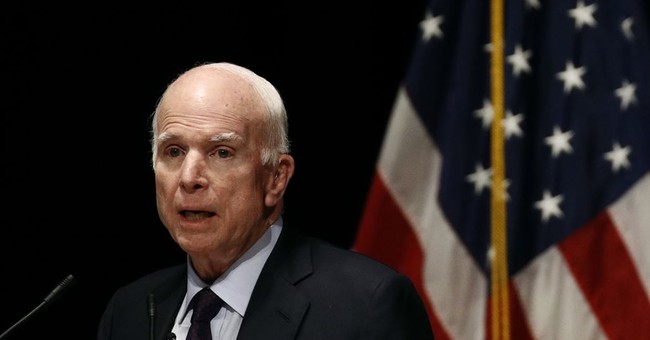 Though the 2016 presidential election was decided over a year ago, Hillary Clinton and members of the left are still bitter and struggling with coming to terms that Donald Trump is the 45th President of the United States. Like many, Sen. John McCain (R-AZ) has heard enough of it.

During an interview with Esquire, the Republican senator criticized the former Democratic candidate for not losing with grace.

Regarding Clinton's new book "What Happened" and her incessant excuse making, McCain asked, "What's the f***ing point? Keep the fight up?"

The eighty-one-year-old senator, who knows what it's like to lose a presidential campaign, stated that when a candidate loses, it's hard for them not to blame someone or something else for their loss.

"One of the almost irresistible impulses you have when you lose is to somehow justify why you lost and how you were mistreated: 'I did the right thing! I did!' The hardest thing to do is to just shut up," he explained.

Sen. McCain also stated what Hillary Clinton should already know: "You've got to understand that you can't rewrite history."

Part of Clinton's problem, according to Sen. McCain, is that she has nothing, politically speaking, to do. After losing in the 2008 election to former President Barack Obama, Sen. McCain was able to return to the U.S. Senate where he has held office since January 1987. For someone who was involved in politics or was politically active since her husband became the Governor of Arkansas, "it appears" Clinton still needs to be in the spotlight. After being the former First Lady, a U.S. Senator, and the secretary of state, there is a desire to remain relevant.

Sen. McCain gave this last bit of advice to Clinton whose political career is at its end: "History will judge that campaign, and it's always a period of time before they do. You've got to move on."