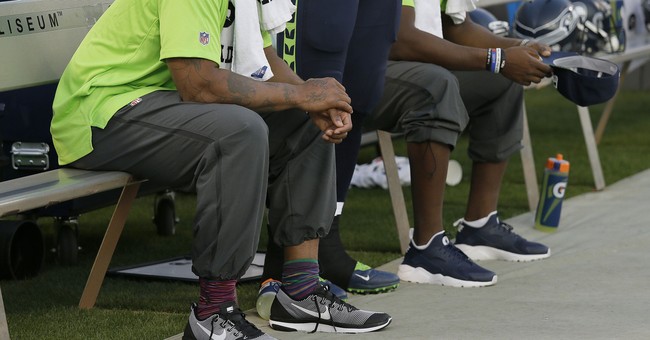 The National Football League is once again the center of discussion for police brutality.

Wednesday morning, Super Bowl Champion and Seattle Seahawks' star defensive end, Michael Bennett, posted a statement on Twitter describing an encounter he had with Las Vegas police officers as he was leaving the highly anticipated Mayweather-McGregor boxing match last month. In his statement, Bennett accused the officers of using excessive force and targeting him for "simply being a black man in the wrong place at the wrong time."

Bennett's statement begins by describing what can only be imagined as a chaotic scene. As people were leaving the arena, Bennett claimed to hear what sounded like gunshots. As people began to run, that was when everything went south for Bennett.

Officers, for an unknown reason, drew their weapons on Bennett and ordered him to the ground. While on the ground, Bennett claimed an officer held a gun to his head and threatened to "blow [his] (expletive) head off." Another officer was said to have driven his knee into Bennett's back, which made it hard for him to breathe.

TMZ Sports has released video footage of the incident, but it neither verifies nor disproves certain claims made by Bennett.

Officers picked Bennett up and placed him in a police car until they had confirmed his identity. He was later released yet still did not receive an explanation for his detainment.

During the ordeal, Bennett describes thinking about his family and wondering if he would die because of the color of his skin. Bennett goes on to state that he believes "equality doesn't live in this country, " and this is why he sits during the playing of the nation's national anthem. Invoking the names of Eric Garner, Michael Brown, Trayvon Martin, Tamir Rice, and Charleena Lyles, Bennett says the "system failed" them as well as him. Oakland Civil Rights Attorney John Burris will be representing Bennett, as they will file a civil rights lawsuit against the officers. Sports reporters, celebrities, political commentators, and fellow athletes are supporting Bennett’s lawsuit.

.@mosesbread72 Vegas experience is why we will relentlessly pursue equality and reform. We stand with you bro ???#playerscoalition https://t.co/8JovwNPvlk

@mosesbread72 experience in Vegas is another reminder of how no black person is exempt from racism regardless of status.

This violation that happened against my Brother Michael Bennett is disgusting and unjust. I stand with Michael and I stand with the people. pic.twitter.com/TqXFiso6lk

So is Michael Bennett gonna get an apology from this police department? https://t.co/QtszyeWtEx

#BlackLivesMatter: I stand with Michael Bennett. And I stand with the people. We're in this together brother. https://t.co/HR4XknWJV3

This latest incident comes as NFL players are still protesting the national anthem because of police brutality and claims of racial inequality. During an NFL preseason game, players of the Cleveland Browns took a knee during the anthem, and former NFL player Colin Kaepernick continues to have activist groups support him and argue that he should have a job in the NFL. Oakland Raiders running back Marshawn Lynch has decided to sit during the anthem as well. The Green Bay Packers’ quarterback, Aaron Rodgers, who plays on the same team as Michael Bennett’s brother, supports those who kneel or sit during the national anthem and is one of the several players who expressed their opinion that Colin Kaepernick should be signed by one of the NFL’s 32 teams.

Michael Bennett’s encounter with Las Vegas police will undoubtedly continue the discussion of police brutality and the relationship between police officers and the African American community. With the NFL season set to begin Thursday night, NFL fans should expect to see some form of protest.