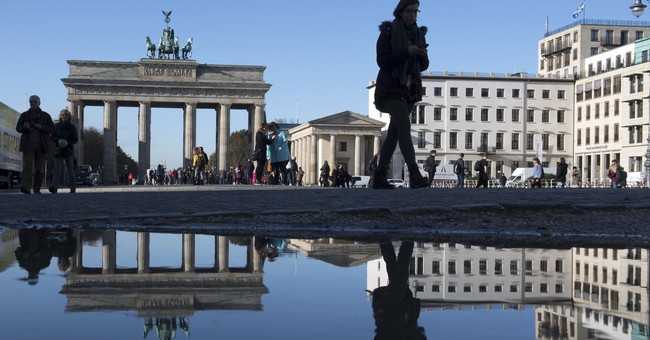 The “End of the Pandemic: Freedom Day” protests in Berlin began on Saturday and continued into Sunday. Maskless demonstrators overwhelmed the streets of Tiergarten Park near the Brandenburg Gate, bearing signs and chanting “We’re here and we’re loud, because we are being robbed of our freedom” to the beat of Queen’s “We Will Rock You.” Some of the signs read, “We are being forced to wear a muzzle,” “Natural defense instead of vaccination” and “Corona, false alarm.” The demonstration culminated in at sit-in at the Brandenburg Gate.

Protester Peter Konz described to a Reuters reporter his concern that scientists who don’t ascribe to the government’s position on COVID-related issues “are silenced, censored or discredited as defenders of conspiracy theories.”

hundreds of thousands protest lockdowns in Germany, many of them without masks... pic.twitter.com/0FCzf596NJ

While frustration over lockdown measures and a plummeting economy motivated many demonstrators, others promoted more extreme agendas.

"We have a lot of opponents of vaccination, citizens of the Reich and people who don't believe that there is Corona at all," said Olaf Sundermeyer, who studies right-wing extremism. “Many people believe they are systematically lied to.

According to The Guardian, demonstrators including “left to rightwing extremists,” QAnon adherents, members of German dissident groups, “anti-vaxxers and self-declared esotericists.”

"Of course there are always different opinions regarding infringements of basic rights and restrictions of freedom -- first, it's normal and, in my view, it's not the majority," Interior Minister Horst Seehofer told Bavarian news outlet Passauer Neue Presse.

Other officials criticized the protests more harshly: “Not only were there severe breaches of hygiene rules and fundamental protective measures disregarded, from all we know inhumane statements were made and the press’s work inhibited,” said government spokesman Ulrike Demmer.

Using loudspeakers, police exhorted protestors to respect mask-wearing and social distancing guidelines. When demonstrators refused, the police filed a criminal complaint against one of the organizers and dissolved the protests.

Law enforcement officials say 1,100 officers monitored the protests, estimated at attendance between 17,000 and 20,000. Attendees are claiming that turnout reached somewhere between the hundreds of thousands and 1.3 million.

Saska Eskin of the Social Democrat party called the protestors "Covidiots" on Twitter.

Forty-five police officers were wounded and 133 protesters arrested. Reasons for arrest included resisting police officers, flashing illegal symbols and disturbing the peace. Three of the police required treatment at hospitals for wounds sustained from glass shards while attempting to break up the crowds.

Local leaders are concerned after a slight uptick in cases in late July that mimics a spike in late June. "Demonstrations should be possible in Corona times. But not like this. Distancing, hygiene rules and facemasks are meant to protect us all," said Health Minister Jens Spahn.

Health officials have lauded Germany for its rapid response to the COVID-19 threat. Case numbers spiked in mid-March, prompting a contact ban on March 22 that required 1.5 meters distance between individuals and banned groups of more than two.