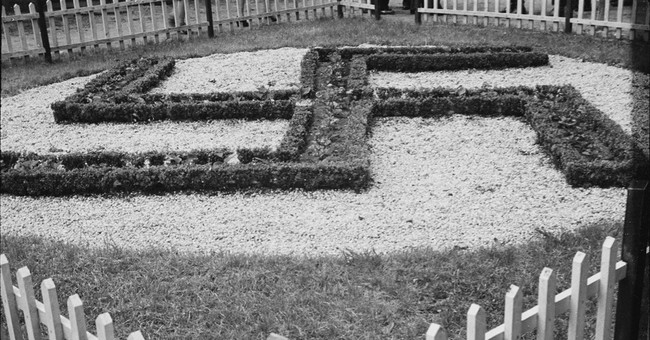 A shocking number of American students are ignorant about the Holocaust, highlighting the glaring historical shortfalls in our education system. That oversight has leeched into teachers and school administrators, especially in some school districts in Virginia, which led to public relations disasters on a biblical scale. From t-shirts with what appeared to be swastika-like logos to kids marching around in gear from Imperial Germany, administrators were busy doling out press releases apologizing for this unnecessary blitzkrieg that caused a ‘heil’ of a problem—and rightfully so. What the hell is going on?

This logo, resembling a swastika,was approved by @HanoverSchools, VA. Jews are offended at the lack of consideration for our "historically marginalized community". Ignoring complaints from parents is discounting our "lived experience". @LCPSOfficial is on notice too. pic.twitter.com/7nYUJZCBQu

In Hanover County, a pro-unity t-shirt had some striking Third Reich vibes, prompting the administration's apologies. They claim there was no ill-intent with the t-shirt designs. All merchandise sales got halted, with efforts to remove the logo from the rest of the conference materials. This fiasco feels like a grocery store recall; only this one was avoidable if people picked up a history book (via WRIC):

Hanover Public Schools issued an official apology Wednesday after printing T-shirts with a logo that resembled a swastika and distributing them to staff at a professional development conference.

“We are deeply sorry for this mistake and for the emotions that the logo has evoked by its semblance to a swastika,” Superintendent Michael Gill wrote in an apology. “We condemn anything associated with the Nazi regime in the strongest manner possible.”

Gill wrote that he believed the shirt design was “created without any ill-intent” by a teacher, and that the logo was intended to “represent four hands and arms grasping together” as a symbol of unity.

This t-shirt trip-up isn’t an isolated incident. In February, a school in Loudoun County had its equity event devolve into a homage to Imperial Germany.

A joint statement from the Army of Parents, Jexit, and Hanover Patriots that touched on the Nazi t-shirts also cited this past event in Loudoun.

“A student was permitted to wear a military costume from Germany’s Second Reich and parade through the John Champe High School hallways carrying two flags with the iron cross for ‘Culture Day,’ a symbol of hate and violence toward Jews,” the statement read.

Following this incident, there was never a “community-wide” apology, and the student was permitted to wear the costume with the principal's approval. Loudoun County Public Schools did issue a mea culpa, albeit a general one.

Here’s the rest of the statement from Hanover Schools Superintendent Michael Gill about the swastika t-shirts:

We are writing today in response to concerns that have been raised regarding the logo that has been used during this week’s Unified Professional Learning Conference. One of our teachers designed the logo intending for it to represent four hands and arms grasping together – a symbol of unity for our all-county professional learning conference. Nothing more. While we are confident that the logo was created without any ill-intent, we understand that this has deeply upset members of our staff and community who see the logo as resembling a swastika. We have stopped distributing the t-shirts that include the logo, and we are working to remove it from all conference materials

We are deeply sorry for this mistake and for the emotions that the logo has evoked by its semblance to a swastika and, by extension, to the atrocities that were committed under its banner. Unquestionably, we condemn anything associated with the Nazi regime in the strongest manner possible

As a school division, we are committed to inclusion and ensuring that all students, faculty, staff, and community members feel welcome, safe, and secure in our schools. We are thankful for our staff and are proud of the diverse learning opportunities that this Unified Professional Learning Conference has provided for them. We truly regret this error and are sorry that it has distracted from the great work that is being accomplished through this conference and throughout the school division, which will help us to continue to uphold our longstanding Tradition of Excellence by supporting all students and their unique needs.

As always, we continue to value the feedback we receive from our community. Again, we sincerely apologize for this mistake and appreciate your understanding and continued support. Thank you.

Our schools are out of control. We have teachers trying to make all the kids question their gender identity, with pronouns becoming a new battlefield in the political correctness war. Loudoun County schools had already faced the wrath of its student body and parents when the upper crust there tried to bury a student who was sexually assaulting girls in the bathrooms. Now, we have Second Reich nonsense on Culture Day. School choice has never looked so good.