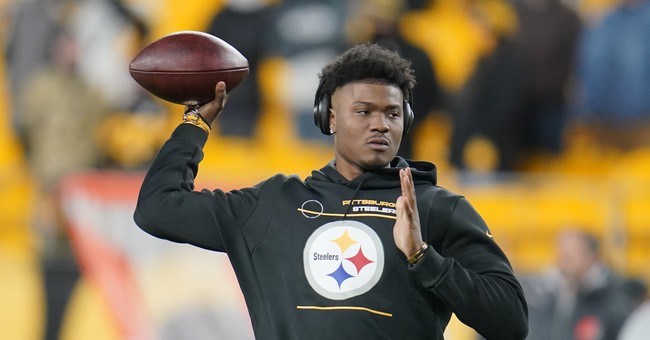 Former first-round draft pick Dwayne Haskins died on April 9. He was struck by a dumpster truck while walking on Interstate 595 in Florida. At first, it’s an insane story because that road is like Mad Max. You don’t want to be walking or jogging on it. So, whether he was training or whatever—something wasn’t right.

We then learned the reason why he was walking on the major highway. The Steelers player was trying to find gas. His car had run out. Haskins was in the Sunshine State after being invited by newly-signed quarterback Mitchell Trubisky for some workouts. Trubisky is probably going to be Pittsburgh’s starting quarterback and Haskins would likely have served as his backup. Now, toxicology reports show that Haskins was legally drunk when he was struck and killed (via CBS Sports):

The results of Dwayne Haskins' toxicology report have been released nearly six weeks following his tragic death at 24 years of age. The former NFL quarterback died after being struck by a truck on a Florida interstate after he left his vehicle.

The report, released by the Broward County Medical Examiner, revealed two positive blood samples for alcohol. Haskins' blood alcohol samples were .20 and .24, according to the Miami Herald. The legal alcohol content limit in Florida is .08. Two drugs -- ketamine and norketamine -- were also found in Haskins' system. Those drugs can be used as a medical anesthetic or for recreational purposes.

Attorney Rick Ellsley issued a statement (via NFL Network) on behalf of Haskins' widow, Kalabrya Haskins, was released shortly after the autopsy results were released.

"On behalf of Dwayne's wife, his family, and his memory, and on behalf of the truth, we respectfully request and pray for privacy, for patience, and for the public to withhold any judgement during this period while the law enforcement authorities continue to investigate and conduct their important work."

In a 911 call made the morning of Haskins' death, his wife told dispatchers that Haskins had run out of fuel and was looking for gas. A female passenger inside Haskins' car prior to his death also told the Florida Highway Patrol that Haskins had left the car in search of gas.

It seems like Haskins was heavily drinking the night before and the residual boozing was probably still in his system. Look, we’ve all been there. I’ve certainly had a few experiences of drinking a ton and still being drunk the next morning in college. For NFL players, partying is just part of the lifestyle. It happens. Yet, it could explain why Haskins thought he could reportedly cross the road; he was said to be in the roadway when he was hit. With a blood alcohol content of .20, your judgment is impaired. It doesn’t make this any less tragic, however. Haskins was 24.