Even Pro-Choicers Are Appalled By Bette Midler's Baby Formula Tweet 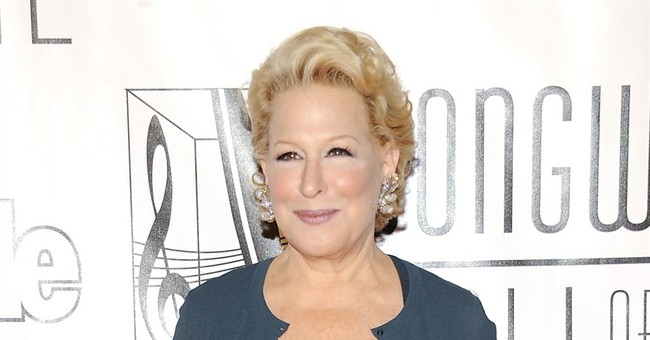 Bette Midler cannot get out of her own way. Maybe it’s time to hang it up, lady. Truly. This is what is like the third time you’ve stepped in it—and this time even the pro-aborts are telling you to shut the hell up. We all know that there’s a baby formula crisis. The Biden White House finally recognized it. It’s not some Fox News conspiracy. Mothers are finding it very difficult to find baby formula. To the Left, this isn’t a real problem since most of these miserable clowns are childless. IT's yet another domestic crisis to hit this White House and no one is confident they can fix it. The Biden administration is like the 2017 Cleveland Browns season: winless. Here’s what the Hollywood actress has to say about the current crisis facing America’s mothers. Midler was commenting on a tweet from MSNBC’s Stephanie Ruhle.

Ilyse Hogue responded, “Bette, respectfully, this is a very bad take. I had twins. I didn’t produce enough milk for both. Without formula, I would have had to have chosen which one got to eat. To say nothing of kids that get separated from the birth mothers very young.”

Bette, respectfully, this is a very bad take. I had twins. I didn’t produce enough milk for both. Without formula, I would have had to have chosen which one got to eat. To say nothing of kids that get separated from the birth mothers very young.

Wow. Hogue is the former president of NARAL Pro-Choice America. Even top pro-abortion activists are calling her out. She had to walk back her remarks about Joe Manchin and West Virginia when she smeared everyone who lives there as being drug-addicted, poor, and illiterate. She also said that the right to an abortion was established by the passing of the 14th Amendment. That is amazingly incorrect.

“Roe v. Wade has been settled law, guaranteed by the Constitution for 50 years; the 14th Amendment to the document that is the foundation of our country’s laws.  If they strike down this amendment, what is to stop them striking down others that conservatives don’t agree with?” she tweeted.

Well, you can’t strike down an amendment. It’s beyond embarrassing.

Midler has joined a chorus of liberals who have melted down ever since a copy of a draft opinion in the Dobbs case was leaked. The opinion has the Supreme Court primed to overturn Roe v. Wade, though abortion won’t be banned nationwide should that happen. Still, Midler needs a Twitter break because even ardent progressives find her takes to be trash.