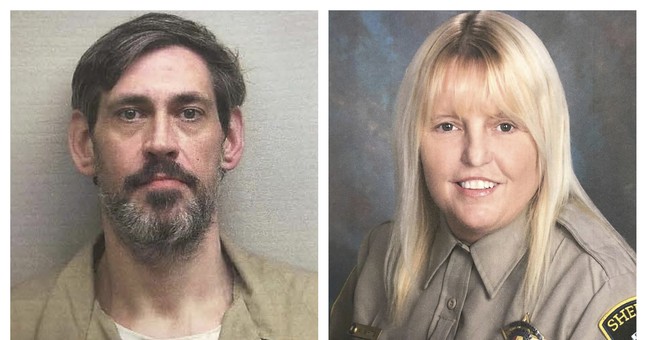 There is a lot going on right now. Inflation is through the roof. Baby formula is now in short supply. The pain at the gas pump continues, but a nationwide manhunt has ended. It’s something out of Bonnie and Clyde. Alabama Corrections Officer Vicky White said she had to take capital murder suspect Casey White to a court date on April 29. Neither of them showed up at the courthouse. They fled. The lovebirds evaded the authorities for days before US Marshals zeroed in on them in Indiana. They were spotted at a car wash. Officer White reportedly sold most of her possessions prior to fleeing with White. She had tens of thousands of dollars at her disposal after she sold her home prior to executing this jailbreak (via USA Today):

Former corrections officer Vicky White, 56, and inmate Casey White, 38, vanished on April 29, and authorities have since said the couple had a "jailhouse romance" and were planning their escape. They were arrested Monday after a police chase and subsequent car wreck in Evansville, Indiana, Lauderdale County Sheriff Rick Singleton said. Casey White was injured in the crash, and Vicky White later died.

The pair was likely able to go undetected for so long because of Vicky White's more than $90,000 in cash from selling her home a month ago, said Lenny DePaul, the former chief inspector and commander of the U.S. Marshals' New York/New Jersey Regional Fugitive Task Force.

DePaul is not associated with the ongoing investigation.

Vicky White, whom authorities have since called an accomplice, allegedly told coworkers she was taking Casey White to a courthouse appointment before the couple vanished. Surveillance footage shows Vicky White escorting Casey White out of the Lauderdale County Detention Center and into a patrol car, which was found abandoned in a shopping center later in the day.

Upon being spotted in Indiana, a car chase ensued which ended with the fugitive couple crashing their vehicle. With capture imminent, White pulled out a handgun and shot herself in the head. The couple were reportedly prepared to fight to the death, as police noted (via Indy Star):

An escaped inmate from Alabama planned to have a "shootout" with officers if he and an alleged accomplice hadn't been caught Monday afternoon, Vanderburgh County Sheriff Dave Wedding said Tuesday.

Officials from the sheriff's office, U.S. marshals, Evansville police and a slew of other agencies held a news conference here Tuesday with local and national media, one day after Casey and Vicky White were captured after a short car chase up U.S. 41.

Before she killed herself, White reportedly thought about exiting the vehicle and running away (via NY Post):

Recommended
NYC Health Department Is Urging Residents to Put Their Masks Back On...But It's Not Just Because of Covid
Leah Barkoukis

Chilling 911 audio appeared to capture former jail boss Vicky White telling her fugitive beau Casey White in her final moments that they should “get out and run” from their car — before allegedly shooting herself in the head as cops close in.

“Airbags are going off! Let’s get out and run!” a woman, who is believed to be Vicky, says as sirens blare, according to the audio obtained by NewsNation.

Seconds later, the 56-year-old woman turned the gun on herself behind the wheel of the getaway Cadillac in Evansville, Indiana, marking the end of the lovebirds’ 11 days on the lam.