We Knew This Was Coming: Op-Ed Says George Washington University Has to Change Its Name 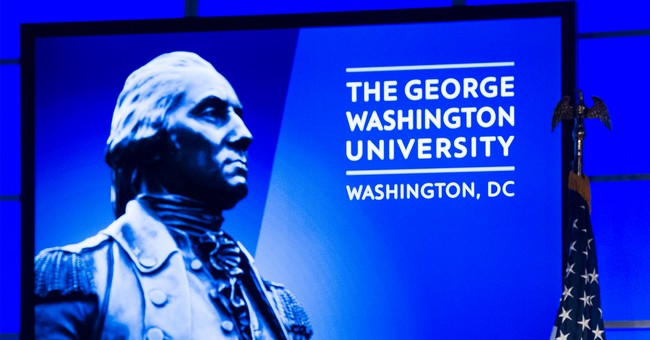 How did this ever get published—and in The Washington Post no less? You don’t have to publish woke garbage, guys? Twitter is not the real world. Social media may make your marketing and communications teams be flooded with progressives frothing with rage, but there’s a shelf life to that nonsense. It goes away. On this, a bunker mentality should be adopted because this opinion piece about how George Washington University is exactly what you’d expect from the woke Left who thinks that the erasure of American history is the cure to the dark times we’ve had as a nation. They can’t see the forest through the trees. We’ve made progress. Is there more work to be done? Sure—but the woke Left is addicted to being perpetually miserable. We have moved past the dark days of Reconstruction and Jim Crow. And no, voter ID laws are now Jim Crow. This op-ed which was written by some senior is just a list about this, that, and the other regarding what’s wrong with the school. It’s a window into the soul of these people—hapless, lifeless, and totally without joy. The only joy woke left-wingers feel comes from their endless crusades in making others as miserable as they are (via WaPo):

I'd say we reached peak stupid, but we all know there is no peak. https://t.co/WNQMwRCN0c

How did this column make it into the hometown paper?? https://t.co/pXtoc9Ruv6

The name change streamlined with calls for racial justice in a modern era in which students across the country are demanding change. As our nation’s history of slavery, Jim Crow, red lining and other discriminatory policies toward African Americans has never been fully addressed or atoned for, these pleas for racial justice are a reflection of a shifting paradigm in American politics in which compromise and intolerance are no longer an option. However, the renaming of the University Student Center falls short in addressing the main issues of systemic racism and inequality still present on campus.

Racism has always been a problem at GW. At the university’s founding in 1821, enrollment was restricted to White men. In 1954, then-university president Marvin employed numerous efforts to preserve segregation, arguing for a “homogenous” group of White students. In 1987, Black students organized to demand more visibility in a predominantly Black city where Black students were outnumbered by huge majorities. Today, with Black enrollment at about 10 percent, Black students on campus continue to struggle for community. Despite alleged efforts by administration to enhance diversity, the admissions office continues to fail to ensure a student body with adequate minority representation.

These problems are rooted in systemic racism, institutional inequality and white supremacy. There are at least four ways the university could achieve progress: Decolonized university curriculum, increased Black enrollment, the renaming of the university and the selection of an African American President.

The controversial Winston Churchill Library must go. The university’s contentious colonial moniker must go. Even the university’s name, mascot and motto — “Hail Thee George Washington”— must be replaced. The hypocrisy of GW in not addressing these issues is an example of how Black voices and Black grievances go ignored and highlights the importance of strong Black leadership.

Frederick Douglass, a statesmen, political scientist, diplomat, feminist and abolitionist, is a perfect example of a possible namesake to replace George Washington.

What the hell is this? Also, shut up, dude. There is no Frederick Douglas without George Washington. Washington was a founding father and our first president. He’s not being canceled, and the university should ignore these petty and trivial tantrums of the woke Left. I can assure you that racism isn’t erased by changing names, appointing a black university president, or filling more professorship vacancies with nonwhites. It just feels better, right? It’s not about facts. It’s about feelings, and that is not a good guide for social policy. If you don’t like it, then transfer. There are scores of other institutions in America.  If George Washington University makes you miserable, then leave but we all know you won’t. The Left is at its core rotten and destructive. Like a virus, it must consume and kill all that lay before it. It’s a horde of crazy people, and this op-ed is certifiable.

And yes, I hope you caught onto the irony of this whole thing too:

lol this was published in the WASHINGTON post https://t.co/1Wnly441rl

Share this on Facebook
Tweet
Here We Go Again: Yet Another Democratic Politician Makes a Fool of Themselves Over Banned Books
Rebecca Downs
'It's Just Incompetence': There Were Red Flags Everywhere With the Buffalo Shooter
Matt Vespa