Here's Why the Story About the Person of Interest in the NYC Subway Shooting Will Vanish...Soon 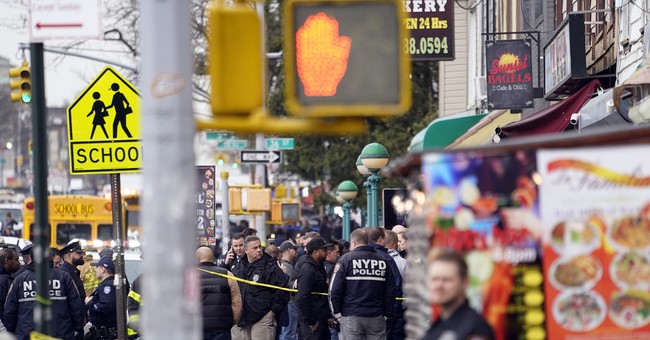 Spencer covered this story yesterday morning. A man opened fire on a New York City subway. He shot ten people. Five were listed in critical condition. The good news is that no one was killed. It's a bizarre incident. It was initially reported as an explosion but later confirmed to be a mass shooting. The suspect reportedly put a gas mask on before launching his attack. He fired 33 times into the crowd. The shooter's name is still not known, but we have a person of interest.

We don't know if this person is the suspected gunman [UPDATE: Frank James has been arrested] (via NBC New York):

This is Frank James who is a person of interest in this investigation. Any information can be directed to @NYPDTips at 800-577-TIPS. pic.twitter.com/yBpenmsX67

At least 10 Brooklyn subway riders were shot Tuesday by a man wearing a gas mask and a green construction vest who tossed two smoke canisters in the train car to distract the rush hour crowd before opening fire, officials said.

The still-unidentified gunman was in the rear corner of the second train car in the moments leading up to the attack, police said at an evening press conference. As it rolled into the 36th Street and Fourth Avenue station in Sunset Park around 8:30 a.m., the man opened two smoke canisters and took out a .9-mm semi-automatic handgun.

While the car filled with smoke, he fired at least 33 times, according to NYPD Chief of Detectives James Essig, striking 10 people.

SHOCKED that suspect was known to FBI. SHOCKED. https://t.co/IormpkV6vv

Breaking: NYPD named Frank James as a person of interest in the #Brooklyn mass shooting. I looked into his social media. Like the Waukesha suspect & the Louisville BLM activist who allegedly tried to assassinate a mayoral candidate, he appeared to be a fan of black nationalism. pic.twitter.com/aUQZGakJfW

Frank James, the person of interest in the #Brooklyn mass shooting, posted a photograph of the Dallas #BLM shooter who killed 5 cops. He also posted a prayer asking for whites to die. One of his videos is titled, "We once were kings." pic.twitter.com/s97iXfiyBH

Frank James is still at large, but once he's apprehended—this story is bound to disappear. It goes against the liberal media protocol for mass shooting coverage. For prolonged saturation, rule number one is that it must be a white male. James is black. The white male detail allows the liberal media to discuss hate crimes, the Klan, white nationalism, domestic terrorism, and how the handful of neo-Nazis, Klansmen, and other white supremacist groups are more of a threat to the nation than radical Islamic terrorism. You have to chuckle. All you can do is smile because we're all witnessing mental illness for those who take that view seriously. James appears to be a black nationalist as well.

Oh, and are you shocked that the FBI knew about James going back to 2019? He was on their terrorism radar. Our great FBI is at it again. Taking down a duly elected president—Trump—is a time-consuming enterprise, especially when you're manufacturing all the evidence to support the Russian collusion hoax. Are we shocked that a ton of stuff fell through the cracks? Not just James, but also what appears to be the core of the Olympic medal-winning US gymnastics team who all but shouted that Larry Nassar was a creep—and these guys did nothing. The lack of action prompted FBI Director Chris Wray to offer an apology.

The only reason this story remains in the news is that James is still on the run. Look what happened when Noah Green attacked the US Capitol in April 2021. He killed a Capitol Police officer. The story died as soon as it was revealed that he was a Nation of Islam follower. The synagogue hostage crisis in Colleyville, Texas, last January. Remember that? No, because the perpetrator was a Muslim, 44-year-old British national Malik Faisal Akram. The mass shooting in Boulder, Colorado, which occurred in March 2021, also died when it was revealed that the shooter was not a white male but a Syrian named Al Aliwi Al-Issa.

The liberal media's number one rule with these sorts of stories is that when white men commit them, devote all resources to it. When nonwhites do it, bury the story. The FBI is getting a dose of that, too, with its serial failure in investigating almost everything. It can't protect. It can't serve. It's too busy taking down presidents it doesn't like. The FBI had the stones to say that the Texas synagogue hostage situation was a totally random attack and that the suspect wasn't "focused on the Jewish community."

The Brooklyn shooting story will be gone by the end of the week.

Now, let's say the shooter does turn out to be a white dude, and Frank is cleared. Well, you know the rules now. You know why CNN and MSNBC will dedicate hours to this shooting, along with a few documentary specials on CNN. Meanwhile, America's working class is getting hammered by high gas prices and inflation caused by Biden's agenda.