In Texas, New Law Is Stopping the Steal 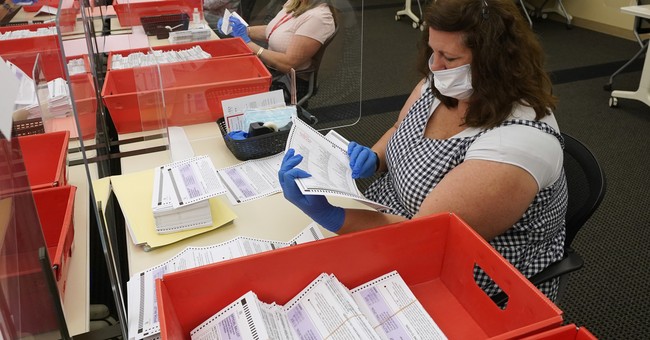 Voter integrity is essential. It's popular. It's why for all the Democrats' yelling about how this, that, and the other is racist regarding new voter laws, these laws aren't going anywhere. Election security withstood an onslaught from Democrats' allies in the media. Then, it dawned on Democrats—gee, voter ID laws are popular.

Yeah, they are—and always have been, fellas. Across the board, Americans support voter ID. This isn't new. The gaslighting began when Democrats, resigned to defeat, tried to say they always supported such measures. Wrong.

"The GOP is racist."

These tired and stale talking points are just noise that caused normal people to either shrug, change channels, or simply take some Advil and move on with their day. It's over. The Democrats' "Hail Mary" pass was to get their federal elections takeover bill through the Senate, which failed because they needed to nuke the filibuster. They didn't have the votes.

With their primaries being held on March 1, Texas' new law is already stopping those who would steal elections. Scores of mail-in ballots are being rejected for not meeting voter ID requirements (via NPR):

Weeks ahead of the state's March 1 primary, local election officials in Texas are sending mail-in ballots back to thousands of voters who had turned them in, citing issues with ID requirements created by the state's controversial new voting law.

In Harris County — Texas' largest county, which is home to Houston — election officials said they'd received 6,548 mail-in ballots as of Saturday and had returned almost 2,500 — nearly 38% — for correction because of an incorrect ID.

That's a far higher rejection rate than is typical.

Voting for the March 1 primary that is currently underway in Texas is the first big election held in the state since Senate Bill 1, a GOP-backed law that introduced sweeping changes to the Texas election code, went into effect.

Sam Taylor, assistant secretary of state for communications, says a Texas voter who is already registered can update their registration online — even after the registration deadline — on a new website the state created to make sure it has all the IDs the voter uses.

"You are not changing anything by adding information to your voter registration record, you are just making it more complete," he says. "So that doesn't start the clock over in terms of whether or not you were registered by the deadline for the March primary."

The high rejection rate should raise eyebrows. How many invalid ballots were counted in 2020? Who knows? Democrats have destroyed that evidence, but the real steal centered on the battleground states where Democratic secretaries of state unilaterally and illegally altered the voting laws without the consent of the state legislatures. Michigan and Pennsylvania specifically saw this occur in 2020. Are we shocked to learn that the state legislatures there are majority Republican? No way would these tweaks be passed, so Democrats did what they do best—cheat.

And that's why true voter integrity laws are important.