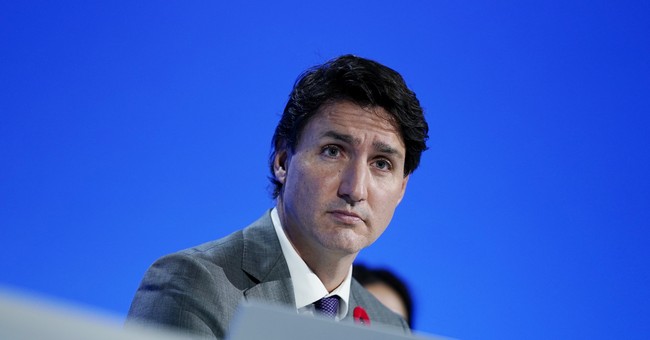 Well, he did it. Prime Minister Justin Trudeau had his “just watch me” moment like his daddy. Trudeau’s father declared martial law in 1970 to put down Quebec separatists. This time…it’s truckers. No, I’m not kidding. Justin Trudeau is afraid of truckers, so he decided to invoke the Emergencies Act to deal with the Freedom Convoy and their allies who are demanding an end to the COVID panic regime. The military won’t be deployed…yet. Civil liberties will not be violated…yet. And Trudeau even said the right to legal protest won’t be impeded…yet. The line from this government is that these measures are limited. They’re not. Sorry, you cannot say these are limited measures when you can seize people’s bank accounts without a warrant (via BBC):

"We are broadening the scope of Canada's anti-money laundering and terrorist financing rules..." pic.twitter.com/oUwsXyKUZL

TRUDEAU: "We do in this country encourage peaceful protest...but we do not accept people who come and curtail other people's freedoms..." pic.twitter.com/zDCSEDApAY

Canadian Prime Minister Justin Trudeau has taken the unprecedented step of invoking the Emergencies Act to crack down on anti-vaccine mandate protests.

Mr Trudeau said the scope of the measures would be "time-limited", "reasonable and proportionate". The military will not be called to assist.

Without a court order, banks will be able freeze personal accounts of anyone linked with the protests.

Deputy Prime Minister Chrystia Freeland said banks will be able freeze personal accounts of anyone linked with the protests without any need for a court order.

Vehicle insurance of anyone involved with the demonstrations can also be suspended, she added.

She said they were broadening Canada's "Terrorist Financing" rules to cover cryptocurrencies and crowdfunding platforms, as part of the effort to clamp down on the protests.

"It's all about following the money," she said.

The Emergencies Act, passed in 1988, demands a high legal bar to be invoked. It may only be used in an "urgent and critical situation" that "seriously endangers the lives, health or safety of Canadians". Lawful protests do not qualify.

Speaking on Monday, Canada's Justice Minister David Lametti said the government believes these conditions have been met, saying the current crisis is national in scope and exceeds the power of existing laws and Canada's provinces to respond.

Don’t worry, @JustinTrudeau isn’t “calling in the military”. He is just authorizing banks to unilaterally freeze your accounts on the basis of suspicion alone, no court order required, with legal immunity. I hope everyone realizes how much more dangerous this is than the military

The truckers want a return to normalcy. Everyone does. In the US, the recent Super Bowl had 75,000 people packed into SoFi Stadium with no masks. There is a mask mandate in California. No one cares, not even the panic peddlers. We all see it which is why everyone knows this is about power, not public safety. The Canadian truckers have reportedly inspired American truckers to have a freedom convoy here which will hopefully be arriving in Washington DC, their target destination, by March 1.

Still insane. Everything you’ve ever worked for can be frozen in Canada without a court order for merely supporting a cause the government doesn’t like. Seems pretty fascist to me. Ontario’s government had already tried and failed to curb the flow of donations to the truckers. Now, the full force of Kim Jong Trudeau is behind it.