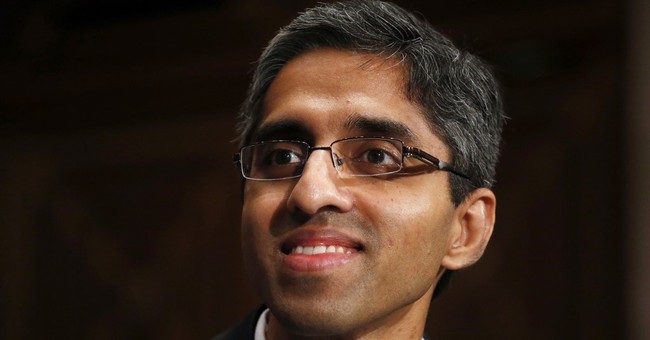 Yes, let’s give more power to Big Tech to be the policeman of what is and isn’t accurate information, says…Surgeon General Vivek Murthy? Yes, I agree with everyone else who saw this story as well.

Why is Biden’s chief medical adviser weighing in on issues that are not in his purview? We also know how this will be enforced. Conservative media will be targeted, and their reach diminished to the point where these outlets are crushed whereas liberal outlets will be able to peddle fake news at will. National Public Radio pushed a fake news story about Justice Sonia Sotomayor being forced to work from home after Justice Neil Gorsuch refused to wear a mask at the request of Chief Justice John Roberts. Gorsuch and Sotomayor denied the story, as did Roberts. The three principals said the story was false and yet no fact check. Also, NPR stood by their shoddy piece.

Murthy really thinks Big Tech is going to be impartial here. I know I’m preaching to the choir. This is the slippery slope argument. At the end of the day, it’s about liberals being unable to tolerate free speech and other people’s views. People can be wrong. Who cares? The issue here is that any conservative view is considered misinformation by liberals. It’s the Big Tech-Democrat-Media complex and it’s declared war on all of us. Their latest target is Joe Rogan, who isn’t a conservative because the man doesn’t toe the line when it comes to COVID and getting five-to-seven shots of the vaccine (via Daily Wire):

The “surgeon general” @vivek_murthy: “Critical part of how we get through this pandemic” is “limiting the spread of misinformation” from shows like @joerogan pic.twitter.com/xexarsaNDN

U.S. Surgeon General Vivek Murthy said Tuesday on MSNBC that not only the government, but Big Tech companies have a role to play when it comes to censoring so-called “misinformation” and curating “accurate” information to the public.

Murthy made the comments after he was specifically asked by MSNBC host Mika Brzezinski about alleged misinformation on Joe Rogan’s highly popular “The Joe Rogan Experience” and general Facebook posts.

“What do you think are the best ways to push back on misinformation about COVID that continues to be aggressively pushed, whether it be Joe Rogan’s podcast or all over Facebook?” the host asked Murthy, according to The Blaze.

Big Tech companies, Murthy said, have an “important role to play” since they are the “predominant places where we’re seeing misinformation spread.”

That’s rich. It’s not misinformation the Left is trying to shut down. It’s free speech, with COVID being used as a shield. You all know this, and liberals are now conscripting medical professionals and experts to peddle the talking points. And these same people wonder why no one trusts them anymore. They decided to whore themselves out to the Democratic Party. We all see it.