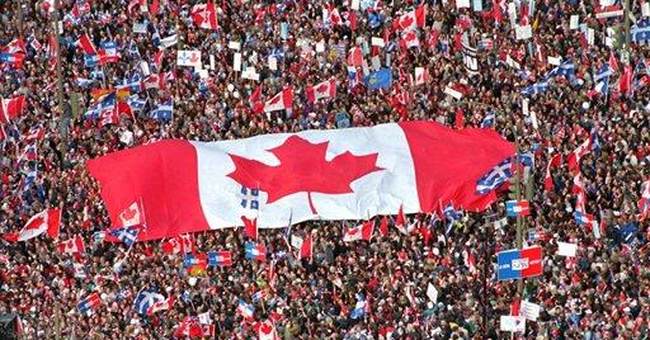 Well, good on ya, Canada. It seems the motto ‘come and take it’ isn’t unique to just Americans. Our neighbors to the north have a new gun law. It’s something that anti-gun liberals want here nationwide. All Canadians that owned firearms that have been included in the nation’s latest ban on so-called assault weapons must turn them over to authorities. The only problem is that they’re not doing it (via The Reload):

Few gun owners are turning in weapons recently been made illegal by the Canadian government.

That’s according to the Royal Canadian Mounted Police (RCMP). They said Canadians had only turned in 160 of the recently-outlawed firearms for destruction since the announcement of the ban.

“The Canadian Firearms Program (CFP) can confirm that, as of December 9, 2021, 18 firearms (formerly classified as restricted) affected by the May 1, 2020 Order in Council (OIC) have been deactivated,” Sgt. Caroline Duval, an RCMP spokesperson, told iPolitics on Friday. “In addition, there have been 142 OIC-affected firearms recorded as surrendered to a public agency for destruction since May 1, 2020.”

The announcement comes as the April 2022 deadline for the “assault weapon” confiscation order rapidly approaches. The Canadian government’s plan to collect the affected weapons has been rife with problems since it was announced. Consulting fees and enforcement planning have resulted in a bloated budget before even a single weapon has been “bought back,” and a concrete plan for the buyback program is yet to be finalized. It now appears affected gun owners are hesitant to give up their guns.

The difficulties experienced by the Canadian effort and a similar gun confiscation effort in New Zealand may impact the debate over implementing a similar policy in the United States. While gun-control advocates have shunned confiscation policies in the past, some Democrats have warmed to the idea of taking AR-15s and similar guns in recent years. Congressman Eric Swalwell (D., Calif.) wrote an op-ed in favor of confiscation in 2018. Vice President Kamala Harris said she supports a mandatory buyback scheme similar to Canada’s policy during a 2020 presidential primary forum hosted by gun-control group March for Our Lives. Beto O’Rourke garnered much attention when he declared, “hell yes, we’re going to take your AR-15, your AK-47” during the same campaign. He has stuck with the policy since entering the 2022 Texas gubernatorial race despite the idea polling poorly.

It seems the only people who have willingly turned over their firearms are the Australians. As the publication noted, buybacks are hardly a guarantee—they mostly fail as well. These are also commonly owned firearms in the United States. Millions own AR-15 rifles for hunting, target practice, and for self-defense. There are millions of so-called high-capacity magazines as well which makes laws against those items illogical as well. Liberals deem a 15-round magazine to be high-capacity. It’s commonplace. In a year where the credibility around government authority has been shattered by serial abuse due to the COVID pandemic, I don’t blame anyone who is just finished complying with mandates.