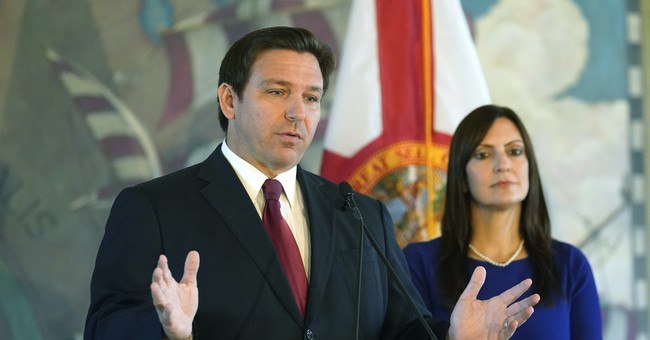 There was another epic meltdown on the Left yesterday about Ron DeSantis—and it wasn’t COVID-related this time. It centered on the Florida governor mulling the creation of a new state militia that he would control. That’s what CNN said in their headline. It’s nothing new. Yet, MSNBC and some other liberal media folks had a level-five meltdown over this proposal. Why? Because anything Ron DeSantis does triggers these precious little snowflakes. What’s even worse is that buried in the CNN piece is direct evidence that Florida is not the only state to have a state militia, roughly half the country has these units (via CNN) [emphasis mine]:

Florida Gov. Ron DeSantis wants to reestablish a World War II-era civilian military force that he, not the Pentagon, would control.

But in a nod to the growing tension between Republican states and the Biden administration over the National Guard, DeSantis also said this unit, called the Florida State Guard, would be "not encumbered by the federal government." He said this force would give him "the flexibility and the ability needed to respond to events in our state in the most effective way possible."

DeSantis is proposing bringing it back with a volunteer force of 200 civilians, and he is seeking $3.5 million from the state legislature in startup costs to train and equip them.

States have the power to create defense forces separate from the national guard, though not all of them use it. If Florida moves ahead with DeSantis' plan to reestablish the civilian force, it would become the 23rd active state guard in the country, DeSantis' office said in a press release, joining California, Texas and New York.

Ron DeSantis is trying to recreate a military force that only answers to him.

This should scare the hell out of every democracy-loving Floridian & American.

I’ll be shining a light on this tonight with @JoyAnnReid on @MSNBC and every day until we beat him in 2022.

WOW: GOP Governor of Florida Ron DeSantis wants to form a personal militia like the "political" leaders in Iraq have. It would be a militia that only answers to him. This is the beginning of a "Red Army" as the GOP prepares for war. Literally. https://t.co/cNsdymLtNz

Wow you log off for a while and find out Lt. Gen. DeSantis has seized control of Florida with his People's Army and is marching north. Georgia will soon fall. Pray for us.

Florida isn’t the only state to have this, Nikki.

They’d be joining the company of nearly two dozen states like… New York and California https://t.co/7uFWIfEjKj

It’s painfully obvious that everyone who was freaking out about this didn’t even read the CNN piece. Just like how no one in liberal media circles even knew about Kenosha or Kyle Rittenhouse until the trial. If they did, there wouldn’t have been a trove of fake news stories about how Kyle shot and killed two black men at a BLM protest. Neither happened. It was a full-blown riot and Rittenhouse shot and killed two white men in self-defense. His would-be attackers were also a domestic abuser/rapist and a pedophile, so it’s not like the world lost some angels here.

Even Hollywood actors, like Sarah Silverman who is quite to the Left, called out the liberal media’s freakout over DeSantis. That’s how embarrassing this full-froth episode was for the other side. Deep-blue California has a state militia, that’s the death blow—the shovel to the face regarding this silly tantrum. Once again, we see that the liberal media just intentionally lies, and it’s also no shock that Joy Reid, one of MSNBC’s most unhinged hosts, took the bait.

Please read the article before you post this stuff you’re a news outlet. The truth has to matter

wow. the last person i ever expected to speak out against false media narratives targeting @GovRonDeSantis https://t.co/5ez9Phq0la

They’re still going with this:

MSNBC panel worries "Florida Man" and "right-wing extremist" @GovRonDeSantis reincarnating the Fla. State Guard will be used to "shoot looters" or precipitate the kidnapping of a governor pic.twitter.com/XBB8ZeJ9pA

There are no words for this stupidity. Just read the article. It’s right there in black and white detailing how it’s not really a big deal. Then again, this is also the side that decided to treat parents like terrorists because they don’t accept the critical race theory trash that’s being taught in schools.