Someone Rammed Through a Wisconsin Christmas Parade...And An Illinois Dem Said Exactly the Wrong Thing 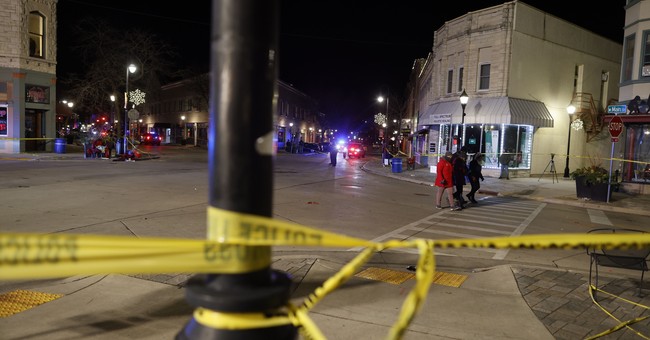 Spencer wrote this up last night. A person drove through a Christmas parade in Waukesha, Wisconsin, yesterday around 8 P.M. Central time. At least five people are dead, with dozens more injured. Around 20 people were struck by an SUV. There's graphic footage of the vehicle ramming into individuals. A joyous occasion was turned into a nightmare. A temporary shelter in place order was issued and then rescinded. Schools in the area are closed today as well. There is a person of interest in custody. We have no clue concerning the motive behind this horrible event.

In the aftermath of the Kyle Rittenhouse verdict, Democrats are unhinged with rage. Progressives are mad. The liberal media is equally unspooled. So, it shouldn't shock us that these depraved creatures think that this incident is "karma" for Rittenhouse being found not guilty on all charges. Yes, an Illinois Democrat said that (via NY Post):

An Illinois Democrat has been blasted for describing the deadly Christmas parade rampage in Wisconsin as “Karma” for the acquittal of Kyle Rittenhouse.

Mary Lemanski, who is listed as the social media director for the Democratic Party in DuPage County, began her heartless online tirade by snarkily dismissing the tragedy as “just self-defense.”

“Living in Wisconsin, he probably felt threatened,” another tweet, which was still online Monday morning, read — referring to the driver being held as a person of interest in the Waukesha incident, which left five people dead and dozens hurt.

“I’m sure he didn’t want to hurt anyone. He came to help people,” she added in her sarcasm-laced missive.

Lemanski, who also lists herself as an acting student with the famed Second City improvisational comedy group in Chicago, also wrote that the Christmas parade rampage was “karma” in another tweet that appears to have since been deleted.

“I’m sad anytime anyone dies. I just believe in Karma and this came around quick on the citizens of Wisconsin,” Lemanski wrote, according to Fox News.

“You reap what you sow. It’s sad people died, but when you open the door to vigilante justice, everyone seems threatening,” she then added in a tweet that was still online Monday morning.

Nobody cared about me like my whole life. My mom used to leave me for hours at a time alone in my play pen. I've put out music for 20 years nobody gave a shit. Why do people all of a sudden care about a stupid remark? I can't believe my 15 minutes of fame is for this shit.

And now, she's mad that we noticed her trash tweets regarding this incident. You can't have it both ways, lady. First, we don't know anything about what caused this yet. It's certainly not related to Kyle Rittenhouse. It is a Rust Belt state, and we all know how Democrats hate people who live there. In fact, most Democrats are probably jumping for glee that people were killed to prop up their moral superiority complex. It's all about the feelings for Democrats. This is a classic example of that. These people are not your friends and want you dead. They hate you. Look at the lengths they'll go to tie a tragic incident in Wisconsin to the Rittenhouse trial solely because both stories come from middle America. She's also not the only one. I'm sure MSNBC and others will have similar takes over the next few days.

Share this on Facebook
Tweet
'This Is Scary': Twitter Announces New Policy About Sharing Images, Videos
Leah Barkoukis
Why Some Are Crying Foul Over the Sentence Antifa Activist Received After Attack on GOP Senator's Office
Leah Barkoukis
Mayo Monkeys? There Were Full-Blown Calls for White Genocide on Twitter Yesterday
Matt Vespa
Against Panic: Slow the Spread of Fear Over Omicron Variant
Guy Benson