Yes, Voters Are Starting to Blame Biden for the Price Spikes 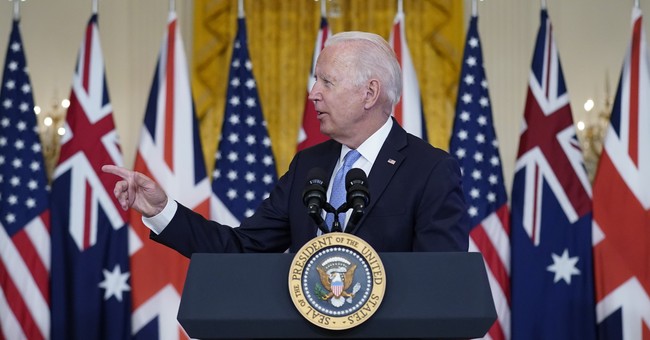 Does Joe Biden know what's going on or does he still hang his hat on that outlier CNN poll that has his approval at 50 percent? Quinnipiac is not a right-leaning poll. They gauged his approval at 38 percent. Fifty percent think Joe is dishonest, with 55 percent thinking he's incompetent at running the country. J. Ann Selzer's poll also has Biden's approval in the 30s. The only way to sink that even lower is if he goes into the bunker on inflation. Scratch that—he already has. He gave a speech, remember? He's going to set up a task force. Joe's also going to keep the ports open 24/7 because the roads are less traveled at night. Does Joe know we have a labor shortage still? The cycle of speeches, task force creation, and abject failure of that task force to accomplish an objective reek of incompetence.

It's a rolling through the motion's presidency. Joe, you must govern. You must lead. You can't go AWOL. With prices spiking at grocery stores, working families are feeling pinched. Women will be the first to know about the inflation fiasco. America's mothers are the ones who manage the books of the home budget. You bet they're noticing the spike in prices. We're not even there yet on heating bills this winter. It's going to be brutal for millions, especially income seniors now that Joe decided to take a katana to the natural gas industry. Right now, inflation is the issue on the minds of most Americans — and they're blaming Joe and his Democrats for pouring salt in that wound (via Washington Examiner):

We’re still a long ways away from the double-digit inflation of the early 1980s. However, while prices of specific things like healthcare, college, or gas have been political hot-buttons from time to time, the issue of inflation writ-large has barely registered as a major issue during my lifetime. This makes it notable that inflation is emerging as a key worry for voters and that many are tying the inflation specifically to Democratic policies.

The Biden administration is struggling with voters as of late, and disappointment in the state of the economy is a major piece of this dynamic. The most recent Grinnell College poll, conducted by legendary pollster Ann Selzer, shows Biden’s approval rating at 37%. Notably, Biden’s job approval on the economy tracks right along with his overall approval, at a relatively poor 36%.

While some people liked the Trump economy but didn’t love Trump himself, how people feel about the economy under Biden seems very closely tied to how they feel about Biden in general. And as much as the Biden team is treating America’s economic anxieties somewhat dismissively (no, this isn’t just about people mad that their treadmill is coming late ), the threat of “stagflation” — economic stagnation paired with inflation — does loom.

This week, the Atlanta Fed projected GDP growth for the year to be fairly dismal. Unemployment is below 5% due to a huge number of people having left the workforce altogether. And some of those who claimed earlier this year that inflation would be “transitory” are changing their tune as supply-chain problems are making it harder to meet consumer demand.

Like Afghanistan, Joe will go AWOL as this crisis worsens. We also have a supply chain fiasco at our ports. Some ships have been idle off the US coast longer than the trans-Pacific journey to get here. It's a mess — and Joe just can't grasp it. He's too old, slow, and stupid to be president. The snobby attitude of this administration concerning rising food costs only exposes the utter detachment liberal America has with normal people. Joe won't turn this around, making way for voters and the GOP to deliver a heavy blow to the Democratic Party come midterm season. The only problem is that Election Day 2022 is months away. How much damage will happen until then?