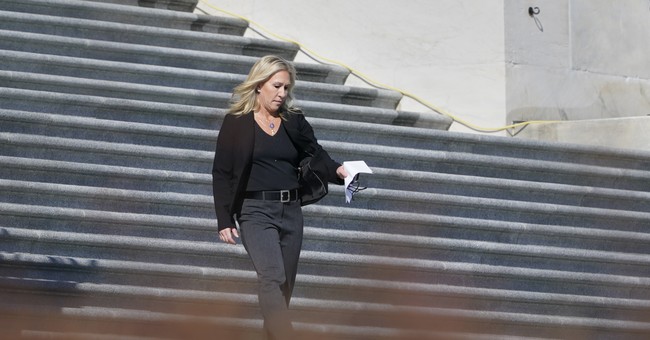 She's feisty. She speaks her mind. She will never back down. Rep. Marjorie Taylor Greene (R-GA) might be one of the most hated Republicans on the Hill. She probably takes pride in that, given that she triggers liberals with her views, some of which are out there. It doesn't matter, though. She was elected. Having nutty views, in general, isn't disqualifying. Rep. Hank Johnson (D-GA) thought Guam could tip over. Need I say more?

And then, there's Rep. Liz Cheney, who's also uncompromising in her views and hated on the Hill…but by fellow Republicans. She was in the House GOP leadership. She was rightfully booted from her post. It didn't stop her from basically doing everything she could to spur a primary challenge. She has spit in the face of the GOP base for months. She's on the Democrats' January 6 commission, which is a clown show. They recently held a vote to hold Steve Bannon in contempt, which led to a clash between MTG and Cheney (via The Hill):

Rep. Marjorie Taylor Greene (R-Ga.), tangled with two members of the Jan. 6 committee on the House floor Thursday, getting into an impromptu shouting match over Black Lives Matter and a wild conspiracy theory about Jewish space lasers starting California wildfires.

Greene first pressed Raskin — who led the Democrats’ prosecution of Trump during his impeachment trial after the Jan. 6 attack — asking him when he would investigate the violence surrounding the Black Lives Matter protests, according to Raskin.

“This is a joke,” Greene said, her voice rising, referring to the Jan. 6 investigation and the Bannon contempt vote. “Why don’t you investigate something people actually care about?”

Cheney shot back that Greene was “a joke” and that she should be focusing on Jewish space lasers, a reference to a conspiracy theory Greene previously had promoted on Facebook blaming “space lasers” controlled by a powerful Jewish family for starting wildfires in California.

“I never said that! You’re done. You’re a joke!” Greene yelled at Cheney, according to CNN. "Why don’t you go investigate something that matters to the American people?”

A little drama on the House floor just now.

MTG confronted Cheney and called her a “joke,” per @kristin__wilson.

Cheney said back that MTG was a joke & didn’t she need to be focusing on her anti-Semitic space lasers, per source.

MTG yelled back, “I never said that”

Greene has a point. No one cares about the January 6 riot. No one. Everyone but the media and congressional Democrats have moved on with their lives. It's time for Congress to do the same. And when it comes to Cheney and MTG — I'm team MTG every day and twice on Sunday in this regard. Cheney is a traitor to the party, and I don't think I'm the only one who is sick of her antics.