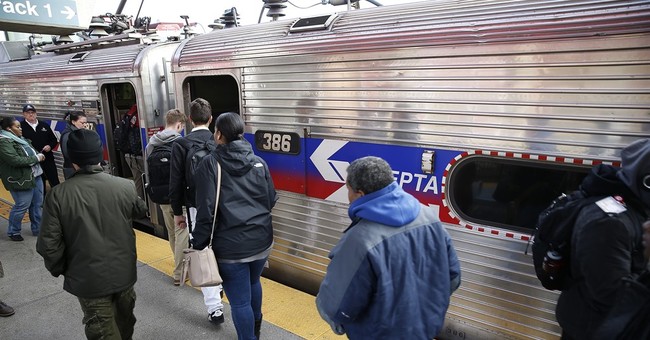 No one intervened. No one. It's the bystander effect in all its horror.

A woman was raped on a SEPTA train in Philadelphia, and no one did anything. This person terrorized this woman for a total of 40 minutes. He groped and touched her inappropriately before tearing her clothes off and raping her less than ten minutes before police officers boarded the train and arrested him. There is security camera footage. It has not been released to the public due to this being an ongoing investigation. The onlookers will not be charged (via 6ABC):

Prosecutors pursuing the case against a man accused of raping a woman on a commuter train last week don't anticipate charging fellow passengers for not intervening, a spokesperson for the suburban Philadelphia district attorney said.

"It's still an open investigation, but there is no expectation at this time that we will charge passengers," said Margie McAboy, spokeswoman for the Delaware County District Attorney's office.

Prosecutors did not expand on why charges were unlikely.

Authorities continue to investigate the Oct. 13 attack, where a woman was repeatedly touched and groped over the course of a 40-minute ride despite trying to push 35-year-old Fiston Ngoy away, according to an arrest affidavit that detailed the surveillance footage from the train.

Investigators say Ngoy ripped the woman's pants off and proceeded to rape her for somewhere between six and eight minutes before officers boarded the train and detained him.

Police declined to say how many passengers may have witnessed the assault, but have said it appeared that some held their phones up in the direction of the assault seemingly to film the attack. Police have also declined to say whether investigators have found any photos or videos of the attack posted online.

In an interview Tuesday with radio station WPHT, SEPTA Police Chief Thomas J. Nestel III, said "as many as 10 people" may have seen some part of the attack.

Nestel has said Philadelphia 911 did not receive any calls about the attack. He said Monday operators at Delaware County 911 were still researching whether it received calls. A message to a SEPTA spokesman seeking updated information was not immediately returned Wednesday.

What's missing in this story, which was highlighted by The Daily Wire, is that Ngoy is an illegal alien. This is a rape committed by someone who shouldn't have been here, which I'm sure is a key detail that will be ignored by the elite press. He was here on a student visa (via Daily Wire):

The man who allegedly violently raped a woman on a train in the Philadelphia-area, as onlookers watched and did nothing, is an illegal alien who reportedly has a criminal history and was supposed to be deported years ago.

Ngoy was reportedly never deported because “he received a ‘withholding of removal’ from an immigration judge in March 2019 after the Board of Immigration Appeals found that his misdemeanor sex offense was not a ‘serious crime’ that would have made him ineligible for such a stay.”

That visa expired in 2015. In the meantime, this Ngoy person has been a menace to society. He's been arrested multiple times for public intoxication, he defecated in public, and he's urinated in public. In November 2017, he groped two women outside of a homeless shelter.