Why CNN's Analysis of Kyrsten Sinema Would Probably Amuse Her 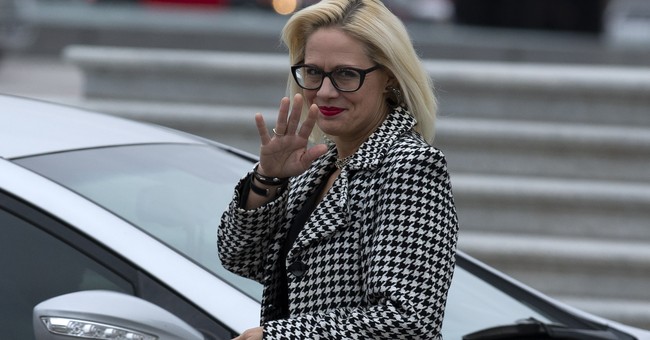 Is she more hated than Trump right now? Probably not, but for some in this camp—it’s a close call. She’s certainly public enemy number one. Sen. Kyrsten Sinema (D-AZ) is one of the roadblocks to the Demcorats’ legislative plans. She and her partner in crime Sen. Joe Manchin (D-WV) are not keen on this $3.5 trillion spending package, aka human infrastructure, that the Democrats want to pass via reconciliation. Not a single Democrat can defect. Well, they have two. It’s dead unless it’s reworked, which the far-left doesn’t want. Manchin had to deal with activists paddling to his houseboat in kayaks. Sinema is being chased into bathrooms. It’s insane. You can’t always get what you want and here we have CNN saying that her politics are “unnecessarily moderate”:

Part of what may be happening is that Sinema thinks that Arizona is a redder state than it actually is. That's understandable insofar as Democrats have only started winning statewide races there with regularity recently. Sinema became the first Democrat to win an Arizona Senate race since 1988.

Arizona's electoral environment is more similar to Georgia, which has become more purple in recent years as well. Biden won the state by about the same amount as he did Arizona. The state just elected Sens. Jon Ossoff and Raphael Warnock to the Senate. They haven't obstructed Biden's agenda to anywhere near the same degree.

So what else might explain Sinema's ways? It's been reported that Sinema holds up former Arizona Sen. John McCain as a role model. McCain was, of course, a thorn in former President Donald Trump's side and didn't always vote in-line with his party.

Democrats in Arizona are about as liberal as the national average, according to both the 2020 primary exit polls and CES. More than 60% of Democrats called themselves liberal in both surveys.

The Arizona senator's unnecessarily moderate politics might be leading her away from her base and toward a tough primary challenge | Analysis https://t.co/GVybloj1Ze

CNN is not a real news organization. https://t.co/aLNjaU1ZNe

Well, I do agree with the McCain part of this being that she’s doing what the late Arizona Republican did to us for years prior to his passing—screw up our plans. Democrats do have their own ‘McCain’ in that regard. Yet, the rest can be tossed in the trash can. Both senators do not care about re-election. Manchin has said this repeatedly for years. If he loses, he’d happily cast off and take his houseboat back home. Sinema is willing to walk away if need be. She doesn’t play by Washington’s rules, and she will do what she thinks is right for the state. How many times has she told Schumer to screw off for people to get that through their heads? So, if this is a warning shot about her re-election chances, I think she’d shrug. She’s going to do things her way. Also, the phrase "unnecessarily moderate" is in itself pretty funny. Democrats will attack anything and anyone if they don't get their way.